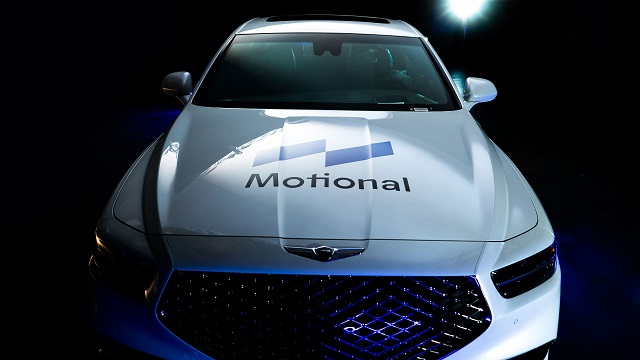 This file photo provided by Hyundai Motor shows a G90 flagship sedan with the logo of the Motional brand on it.

In March, Hyundai set up the 50:50 joint company with Aptiv, to be headquartered in Boston, in order to test fully autonomous vehicles for ride-hailing services later this year.

Hyundai’s decision to work with Aptiv is in line with Hyundai Motor Group’s investments in overseas startups with advanced future mobility technologies as it seeks to take the lead in next-generation vehicles.

“Motional, in all of its previous forms, has been leading driverless technology for decades. Our DNA — a combination of Aptiv’s expertise in advanced technology and Hyundai’s leadership in both vehicle manufacturing and R&D — is uniquely powerful, and positions us to fundamentally change how people move through their lives,” Motional President and CEO Karl Iagnemma said in a statement.

Motional plans to develop a self-driving vehicle platform with Level 4 to 5 autonomous technology by 2022 and supply it to global carmakers.

Hyundai said it will provide its combustion engine, all-electric and hydrogen fuel-cell electric vehicles to the joint firm for research activities and road tests.

Since Level 3 cars are only good for limited self-driving, the driver must be present to take control of the car if the need arises.