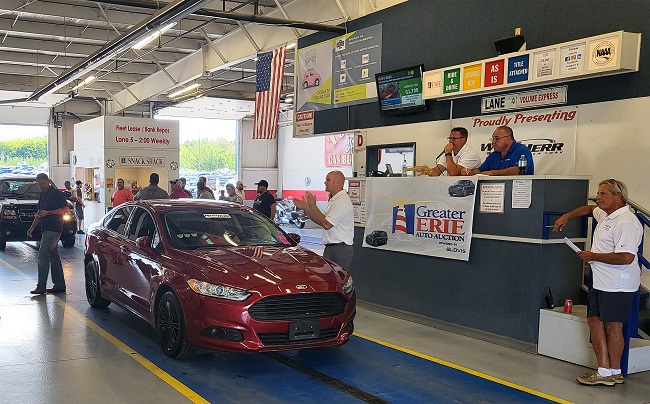 This photo, provided by Hyundai Glovis Co. on Oct. 4, 2022, shows an inside view of Greater Erie Auto Auction, a Pennsylvania-based wholesale dealer of used vehicles.

Hyundai Glovis said it has taken over a 100 percent stake in Greater Erie Auto Auction (GEAA), a Pennsylvania-based wholesale dealer of used vehicles, at an amount it did not specify, citing the terms of the contract.

The acquisition will help the South Korean company, which already has a firm foothold in the domestic used car market, pave the way for a foreign expansion in the same line of business, starting with the U.S., the world’s biggest secondhand vehicle market, before tapping into other regions, like Europe.

About 40 percent of the used car transactions in the U.S. came through auctions in 2020, the company said, citing an auto market tracker’s data.

In particular, Hyundai Glovis said it plans to adopt its online-based digital auctioning technologies, including multichannel network auctions and virtual reality, in an effort to upgrade the dealer into an online-based auction house.

With the takeover, Hyundai Glovis aims to expand the business into at least six major cities across America over the next three years, setting a revenue target of 300 billion won (US$294 million) a year after 2025.