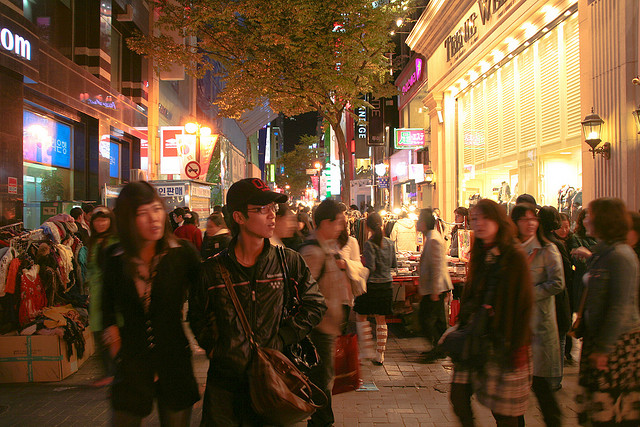 Korea has been one of the biggest beneficiaries of this trend, hosting more than 4 million tourists last year from the neighboring country.(image:parhessiastes @flickr)

SEOUL, Korea, Feb 1 (Korea Bizwire) –  As the Chinese economy grows by leaps and bounds, more Chinese nationals go out and travel the world, opening up their wallet generously. Korea has been one of the biggest beneficiaries of this trend, hosting more than 4 million tourists last year from the neighboring country.

The number of Chinese visitors to Korea was 4.3 million in 2013 including tourists (3.14 million), business travelers (130,000), students (100,000), and others (950,000), overtaking that for visitors from Japan for the first time in history, according to a recent report by Hyundai Economic Research Institute.

Since 2009 the visitor numbers have risen rapidly for tourism purposes while the number of business travelers has shrunk slightly to 130,000 from 170,000 in 2007. The “youke” (Chinese terms for tourists) tend to limit their visits to shopping and gourmet food tasting while not spending so much time on visiting tourist attractions.

Chinese tourists were the biggest spenders with their per-capita expenditure during stay in Korea reaching US$2,150 in 2012. Of this, the portion spent on shopping was 61 percent as of 2012, while the average percentage for all foreign tourists for the same year was 43 percent. As for spending on lodging, the low ratio has not changed much for the past three years. 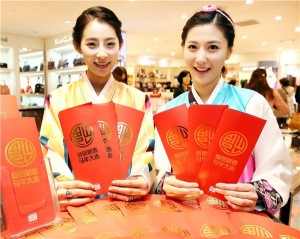 When the tourists go shopping, they tend to visit duty-free shops, although recently the visits to shopping districts such as Dongdaemun and Myungdong have increased. (image: Lotte Duty Free)

Comparing to figures in 2007, the number of Chinese visitors to Korea has increased 3.6 times in 2013, with their per-capita spending rising seven-folds for the past seven years. In terms of both visitor number and spending, the Chinese are ranked No. 1. It is estimated that the total economic effect generated from the youkes is 8.1 trillion won as of 2012, with the employment effect of 106,000.

Assuming the current trend in Chinese visitor numbers continues, it is projected that as many as 10 million Chinese tourists would arrive in Korea’s airports and ports by 2020. In this case, the economic effect would be 68.4 trillion won, accounting for 5.0 percent in the GDP (at the current exchange rate of 1,081 won per U.S. dollar), with the job creation effect of 898,000. The value-creation effect of 32.4 trillion won will be about 1.6 percent of the nominal GDP by 2020.

In order to increase the number of Chinese inbound tourists to 10 million in six year, however, there are several challenges to take on. The first, the Hyundai Economic Research Institute report suggested, is to seek to reduce the portion of low-margin tourism offerings while increasing the share of higher value-added programs.

Secondly, more reasonably-priced budget hotels catering to the needs of Chinese visitors must be built. The next is more “shopping-themed” tourist programs must be offered, with village-size outlet shopping malls built specifically for Chinese visitors.

The fourth task would be to focus more on developing cultural and entertainment offerings in preparation for the shifting needs of the tourists. The fifth is training more Chinese-speaking staffers in venues frequented by the tourists so that they could come back or put in a good word about Korea to their friends and family.