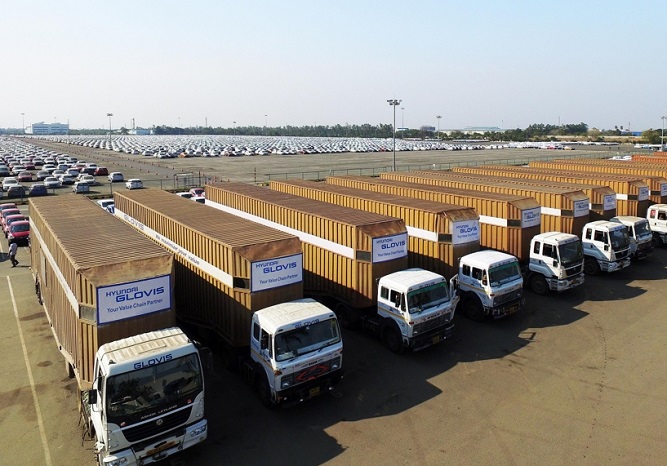 In this undated photo provided by Hyundai Glovis, dozens of trucks are lined up waiting for cargo to deliver at the company’s Chennai sales office in India.

SEOUL, March 3 (Korea Bizwire) — Hyundai Glovis, a logistics unit of Hyundai Motor Group, said Wednesday it has sold a 30 percent stake in its polish affiliate Adampol S.A. to Changjiu Logistics for 18.3 million euros (US$22 million) in a move to strengthen partnership with the Chinese automotive logistics company.

Hyundai Glovis said the deal would create synergy for the two companies in transporting vehicles, electronics and chemical goods as well as other cargos.

“We will expand our logistics network in Eurasia by maximizing the two companies’ capacity and developing cooperative ties,” a Hyundai Glovis official said.

Adampol, a vehicle logistics company, 70 percent owned by Hyundai Glovis, runs a rail terminal for transshipment in the Polish border town of Malaszewicze, a gateway between Europe and Asia.

For its part, Changjiu Logistics secures cargos transported on the Trans-China Railway. The Chinese company annually transports about 4,100 forty-foot equivalent units, including 10,000 vehicles, between China and Europe on a express rail service.

Hyundai Glovis said the company and Changjiu Logistics will expand their service to Western Europe and Northern Europe from the Chinese cities of Xi’an and Chongqing through Poland.