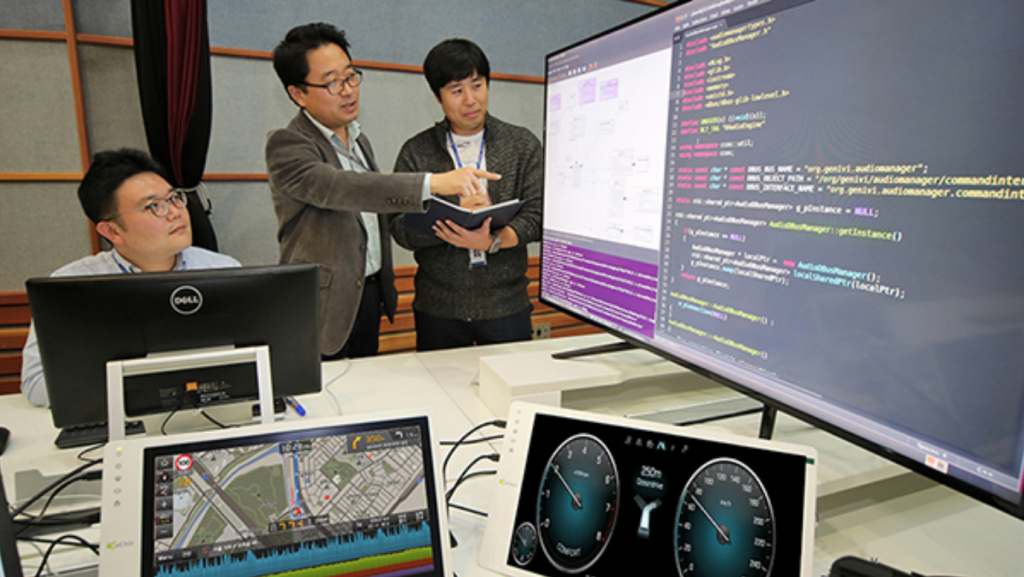 The two companies established in June an infotainment software development department, which will be dedicated to the development of ccOS, with the ultimate goal of launching a ccOS-equipped, “hyper-connected intelligent” model by the year 2020. (image: Yonhap)

The new operating system is a software platform that will have the capacity to process massive amounts of data for connected vehicles, serving as a car’s brain responsible for the efficient operation of various vehicle systems.

According to the automakers, such a highly-compatible platform is essential for connected cars, unlike conventional vehicles that have limited components with minimum data for processing.

The ccOS will not only manage the internal components of a vehicle, such as the engine or gearbox, but also control in-vehicle infotainment systems for audio and video entertainment. The car’s external information, like pedestrians or bypassing vehicles, will also be observed and processed by the OS.

The two companies established in June an infotainment software development department, which will be dedicated to the development of ccOS, with the ultimate goal of launching a ccOS-equipped, “hyper-connected intelligent” model by the year 2020. The department will be using open source platforms including Linux-based GENIVI for its ccOS.

Other possibilities for the ambitious model include Over-the-Air service, a wireless software update platform for ccOS without having to visit a service center, smartphone or smart home connectivity service, full autonomous driving, and smart traffic.

Another focus for the ccOS department is security, a vital element for connected vehicles that could lead to fatal accidents if poorly managed.

“Establishing an independent software platform is among our most important endeavors to become the leader in connected vehicles,” said an official. “We’ll be introducing various connected car services based on ccOS, and establish ourselves in a leading position for future automotive technologies.”

According to a BI Intelligence forecast, 75 percent (69 million vehicles) of the global vehicle output of 92 million in 2020 will be connected vehicles.