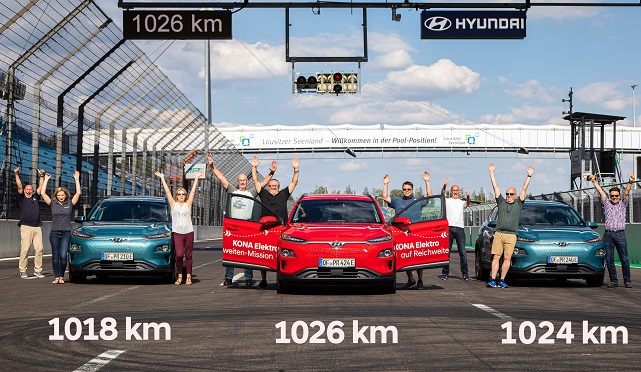 This photo provided by Hyundai Motor shows officials from Auto Bild cheering after the carmaker’s Kona Electric finished a travel-range test at the EuroSpeedway Lausitz in Germany on July 24, 2020.

The Kona Electric traveled 1,026 kilometers on a single charge in a test at the EuroSpeedway Lausitz, a racetrack in the northern region of Brandenburg, from July 22-24, the company said in a statement.

Hyundai tested three Kona Electric models with the goal of traveling at least 1,000 km between recharges. Two other models also achieved a travel range of 1,024.1 km and 1,018.7 km on the racetrack.

Drivers took turns to drive the models until their 64 kilowatt-hour battery capacity ran out, without turning on air conditioning and infotainment systems, despite hot temperatures, the statement said.

They then drove for 35 hours around the racetrack at an average speed of 30 km per hour, achieving average fuel efficiency of 16 km/h, it said.

The test was held in cooperation with German automotive publisher Auto Bild, and it was independently monitored by Dekra, which operates the Lausitz racetrack.

The Kona Electric with the 64 kWh battery can usually travel about 400 km on a single charge on city roads.

Hyundai has produced the all-electric model at its plant in the Czech Republic since March, to better respond to rising demand for environment friendly vehicles in Europe.