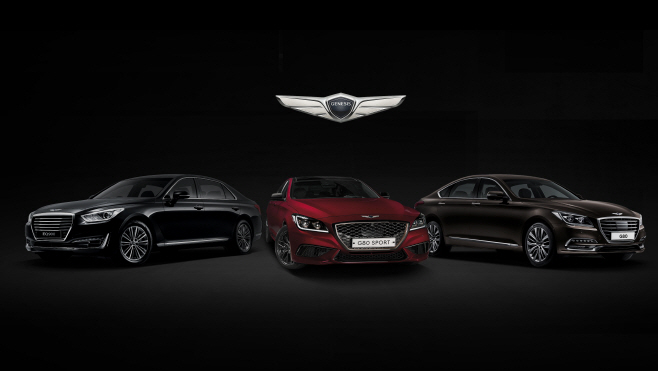 Hyundai claimed 46.6 percent of the market, selling a total of 49,222 of its luxury models, including the former Hyundai Genesis (now the G80) and Equus (G90). (image: Hyundai Motor Company)

Although Hyundai launched a luxury sedan called the Hyundai Genesis in 2008, an official division was established last year dedicated to Hyundai’s luxury line-up with the goal of providing a “human-centered luxury” experience.

According to Hyundai on Tuesday, 21,895 units of its full-sized Genesis G90 sedan (EQ900 in Korea), the brand’s  flagship model, had been sold in South Korea as of October since the vehicle’s launch in December 2015. Genesis also sold 13,284 units of its G80 sedan, which was launched in July, and 13,284 units of the G80 Sport (launched in October).

Genesis Motors helped grow Korea’s luxury vehicle market, an official said, with total sales of luxury cars increasing by roughly 8 percent this year (January to September) to 105,666 from 97,581 units in the same period in 2015. Hyundai claimed 46.6 percent of the market, selling a total of 49,222 of its luxury models, including the former Hyundai Genesis (now the G80) and Equus (G90).

In the U.S., the G80 was launched in August, and the G90 in October, and the company is quickly expanding its marketing in North America, including becoming the title sponsor for the upcoming PGA Tour (Genesis Open) in February at The Riviera Country Club, California.

The G90 was launched in the Middle East and Russia in September, with the company hoping to make inroads in China and the rest of Europe in the near future.

The G80 Sport, targeting younger consumers, will launch in North America, the Middle East and Russia in 2017, Hyundai said.

Hyundai’s future projects for Genesis include launching the G70 mid-sized RWD sedan in the latter half of 2017, in addition to full-sized and mid-sized SUVs and a luxury sport coupe, which the company hopes to introduce by 2020.

“Genesis has been receiving positive feedback both in Korea and overseas for its dynamic and elaborate design, and marketability,” said Genesis strategic executive Manfred Fitzgerald, a former Lamborghini branding executive. “We’re trying to make Genesis a lifestyle brand that influences the life of consumers in a positive way.”