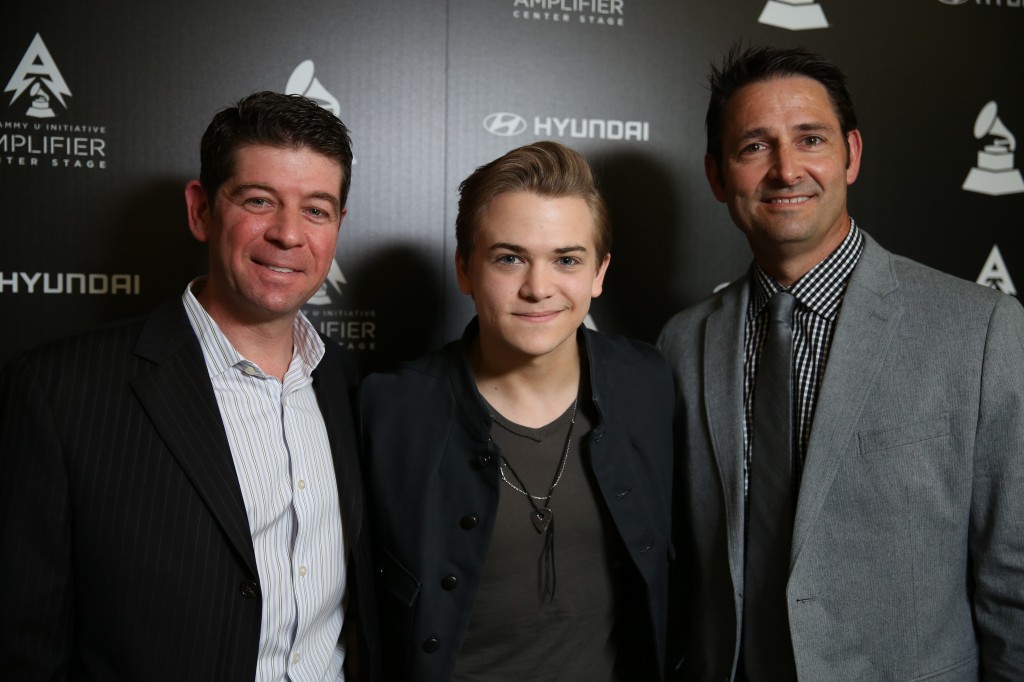 As part of a three-year partnership as the “Official Vehicle Partner” of the GRAMMY Awards®, this year Hyundai teamed up with The Recording Academy® and GRAMMY U® for the 2014 installment of the Amplifier Center Stage program: A GRAMMY U Initiative. (image credit: Hyundai Motor America)

FOUNTAIN VALLEY, Calif., Jan. 24, (Korea Bizwire) – As part of a three-year partnership as the “Official Vehicle Partner” of the GRAMMY Awards®, this year Hyundai teamed up with The Recording Academy® and GRAMMY U® for the 2014 installment of the Amplifier Center Stage program: A GRAMMY U Initiative.

More than 5,000 new song submissions were received through Amplifier Center Stage this year. Eyango (Florida), Reckoner (California), and Jessica Faith (Arkansas), this years newly announced winners, will be awarded one of three program offerings: a recording session and professionally produced track with a leading GRAMMY-winning producer; production of a music video with a noted producer and/or director; and an opening performance slot on a major tour and/or music festival.

“Hyundai’s continued partnership with The Recording Academy demonstrates our brand’s passion for creativity and innovation,” said Steve Shannon, vice president, marketing, Hyundai Motor America. “By teaming up with established pioneers within the music industry, we help bring the next generation of music originators and innovators to the forefront. Our relationship with the GRAMMY Amplifier allows Hyundai to connect with an audience that loves music and share great music with fans everywhere.

Hyundai vehicles also will play a starring role at the GRAMMY Awards. As the “Official Vehicle Partner” a fleet of Hyundai vehicles will help chauffeur VIP guests to and from the annual Clive Davis GRAMMY Party on Saturday, Jan. 25,2014. Additionally, Hyundai’s brand new 2015 Genesis, which features the GRAMMY Special Merit Award winning Harman Lexicon® audio system, and Tucson Fuel Cell vehicle will be displayed on the red carpet and at the official GRAMMY Celebration® after-party. The 56th Annual GRAMMY Awards will air on Sunday, Jan. 26, 2014, live on CBS, at 8 p.m. ET/PT.

Established in 1957, The Recording Academy is an organization of musicians, songwriters, producers, engineers and recording professionals that is dedicated to improving the cultural condition and quality of life for music and its makers. Internationally known for the GRAMMY Awards — the preeminent peer-recognized award for musical excellence and the most credible brand in music — The Recording Academy is responsible for groundbreaking professional development, cultural enrichment, advocacy, education and human services programs. The Academy continues to focus on its mission of recognizing musical excellence, advocating for the well-being of music makers and ensuring music remains an indelible part of our culture. For more information about The Academy, please visit www.grammy.com. For breaking news and exclusive content, follow @TheGRAMMYs on Twitter, like “The GRAMMYs” on Facebook, and join The GRAMMYs’ social communities on Foursquare, GetGlue, Google +, Instagram, Pinterest, Tumblr, and YouTube.