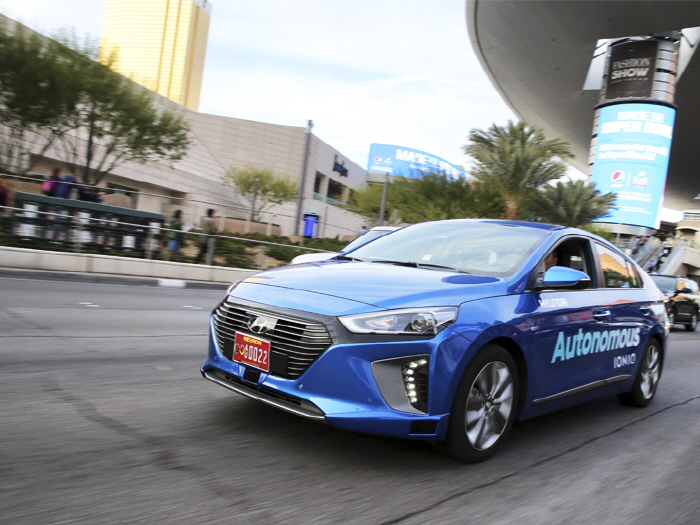 The company plans to develop the autonomous driving technologies mainly to help two affiliates — Hyundai Motor Co. and Kia Motors Corp. — add next-generation smart cars to their lineups, it said in a statement.

“We will ramp up our efforts to develop the Highway Driving Assist (HDA) and other autonomous car technologies to secure bridgeheads in the markets,” an official in charge of parts development at Hyundai Mobis told reporters during the Seoul Motor Show press day Thursday.

Hyundai Mobis expects all new vehicles will have to be equipped with the vehicle-to-everything (V2X) communication system under new regulations in North America and Europe as early as late 2019, he said.

V2X communication is the passing of information from a vehicle to any entity that may affect the vehicle, and vice versa. The HDA system enables automatic steering, braking and acceleration starting at 0 kph.

The HDA3 system sought by Hyundai by 2020 will allow lane changes and other autonomous driving functions to work without intervention by the driver, the statement said.

The HDA1 was intended to keep a vehicle in its lane and effectively help protect the driver from the often serious consequences resulting from lack of attention, distraction or a few seconds of micro-sleep.

All the HDA systems, however, will still have a major shortcoming, since they are designed to be operated in non-urban, virtually intersection-free scenarios, possibly involving tight curves.

Hyundai Mobis expects the HDA4 technologies to be available after 2025 for operation in urban areas punctuated with intersections and tight curves.

They are all key affiliates of Hyundai Motor Group, the country’s second-biggest conglomerate by assets after Samsung Group. Hyundai and Kia together form the world’s fifth-biggest automotive conglomerate in terms of sales.

Hyundai Motor plans to apply the autonomous driving functions initially to its flagship Genesis sedan and then other vehicles from 2020 onward.