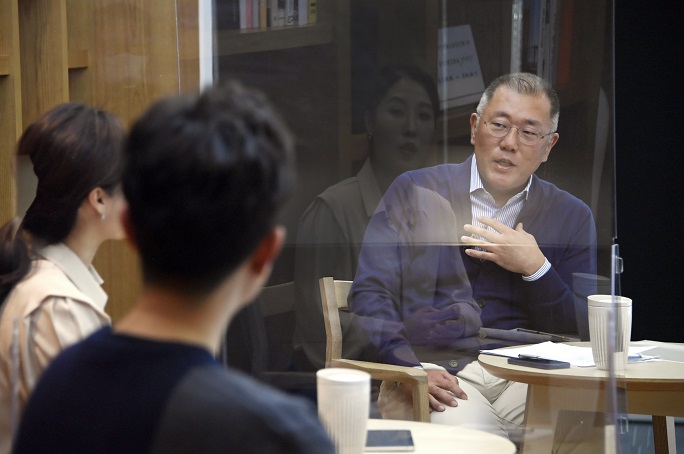 This photo taken on March 16, 2021, and provided by Hyundai Motor Group shows Chairman Chung Euisun having a townhall meeting with employees at the group’s headquarters Seoul.

In an online townhall meeting with employees, Hyundai Motor Group Chairman Chung Euisun said, “the company’s profitability will improve a lot this year as it made a turnaround from the second half of last year.”

Robust sales of the carmakers’ sport-utility vehicles and high-end models propped up their earnings results.

“It was most urgent (for the group) to secure additional liquidity to continue investments in future mobility businesses amid an extended pandemic last year,” he said.

The chairman said the group will continue to invest in autonomous driving, hydrogen fuel cell, urban air mobility (UAM) and robotics technologies to morph into a future mobility solutions provider.

Chung said he hopes Hyundai’s IONIQ 5 and Kia’s EV6 all-electric models embedded with the group’s own EV-only electric-global modular platform (E-GMP) will receive a strong response in the markets and their sales will help the group’s future business plans.

Hyundai plans to launch the IONIQ 5 midsize crossover vehicle in the domestic market in the second quarter and Kia plans the global unveiling of the EV6 later this month.

To strengthen its presence in the eco-friendly vehicle market, Hyundai plans to introduce the IONIQ 6 midsize sedan in 2022 and the IONIQ 7 large SUV in 2024.

Hyundai’s independent Genesis brand also plans to launch an all-electric model this year and will fill its lineup with zero-emission models in the future.

Kia plans to launch seven all-electric models, including the EV6, by 2026.

As for the commercialization of autonomous vehicles and UAMs, Chung said the company aims to commercialize self-driving cars and UAMs for logistics purposes in 2023 and 2026, respectively.