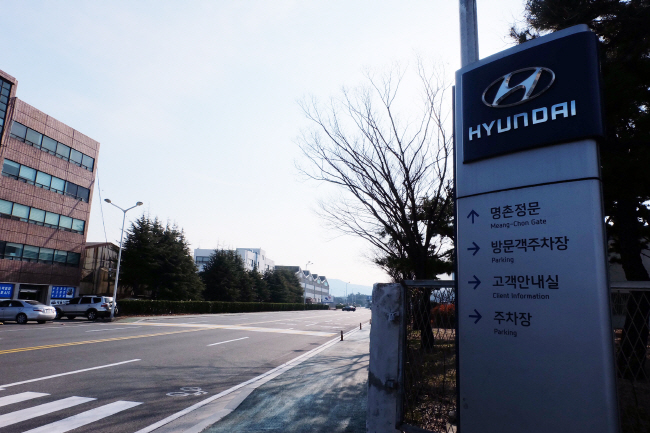 SEOUL, Feb. 28 (Korea Bizwire) — Hyundai Motor Co., South Korea’s biggest carmaker by sales, said Friday it has halted operations at one of its domestic plants after an employee there was diagnosed with the new coronavirus.

Hyundai Motor immediately brought work at the No. 2 plant in the southeastern port city of Ulsan to a halt, and held an emergency meeting with its union to discuss follow-up measures, according to the company and the union.

“The infected person works at the 300-member paint shop at the plant. The company delivered the list of all employees in the plant as they may have come into contact with the person, who is being taken care of by the health authorities,” union spokesman Seo Bo-yeon said over the phone.

“The infected employee visited a health center in the Ulsan plant and used a restaurant also frequented by fellow workers from other plants. The KCDC is checking on the workers who might have been exposed to the infected worker,” he said.

The company said it will restart operations of the No. 2 plant on Monday.

The confirmation of COVID-19 case another negative development for the carmaker, which is already suffering from a shortage of parts from China due to the outbreak there.

At the No. 2 plant, which employs some 4,000 workers, Hyundai produces four SUV models — the Palisade, the Tucson, the Santa Fe and the GV80 launched in January — under its independent Genesis brand.

Hyundai has strengthened its SUV lineup to enhance its profitability and meet rising demand for recreational vehicles in global markets.

The company plans to further strengthen its SUV lineup by adding new models such as the all-new Tucson and the Genesis GV70 this year, as well as an all-electric model under the Genesis badge next year.

In 2020, Hyundai aims to sell a total of 4.58 million vehicles in global markets. The target is 3.5 percent higher than the 4.42 million units it sold last year.

For the whole of 2019, its net profit nearly doubled to 3.26 trillion won from 1.65 trillion won a year earlier helped by robust sales of the flagship Palisade.

Hyundai has seven domestic plants — five in Ulsan, one in Asan and one in Jeonju — and 10 overseas plants — four in China and one each in the United States, the Czech Republic, Turkey, Russia, India and Brazil. Their combined capacity reaches 5.5 million vehicles.

Hyundai halted all of its local plants on Feb. 7 and kept them suspended through Feb. 10 as their parts suppliers in China stopped production during an extended Lunar New Year holiday from Jan. 24 to Feb. 9.

The company didn’t provide the value of production losses caused by the suspension.

It was the first time that Hyundai had suspended all domestic plants since 1997, when the Asian financial crisis affected local manufacturers and Mando Corp. stopped supplying parts to the carmaker.

South Korea had reported a total of 2,337 confirmed coronavirus cases and 13 deaths as of Friday. The first case in the country was reported on Jan. 20.