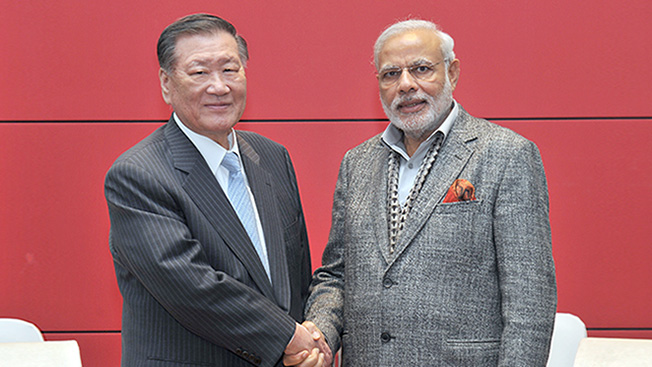 SEOUL, May 19 (Korea Bizwire) — South Korea’s leading carmaker Hyundai Motor is considering a plan to build a third plant in India as part of efforts to expand its presence in the world’s second most populous country, the chairman of its parent group said Tuesday.

Hyundai Motor, the flagship of the world’s fifth-largest auto giant Hyundai Motor Group, currently operates two plants in Chennai, a port city in the southeastern part of India, which have a combined annual capacity of more than 600,000 units.

Group officials said Chung exchanged views with Prime Minister Modi on ways to boost cooperation in the automotive industries of the two countries.

Saying Hyundai’s plants in Chennai are a symbol of economic cooperation between South Korea and India, Chung expressed his gratitude to the Indian government for its support for Hyundai’s sustained development in the world’s largest democracy, group officials said.

“Hyundai Motor Group’s two factories in India plan to produce 640,000 vehicles this year, up 4 percent from a year earlier,” Chung was quoted as saying.

Of the total, 470,000 units will be sold in the India market, with the remainder to be exported to some 110 countries, Chung said.

“In the future, Hyundai Motor Group will expand cooperation in areas not only in the auto sector but also in the country’s key industries such as construction and railway vehicles, and hope to play a more active role in the two countries’ economic development.”

In response, Modi said the Indian government will provide active support to help Hyundai continue its cooperative ties with the Indian automotive industry, according to the group officials.

Hyundai Motor, which entered the Indian market in 1997, saw its Indian sales expand to some 410,000 units last year, grabbing the second-largest market share there with 16.2 percent, according to industry data.

Modi, who took office last year, is credited with propelling the robust growth of Asia’s third-largest economy by putting forward a set of pro-business policies.

Production of India’s car market, which grew 3.2 percent on-year in 2014, is expected to increase 7.8 percent on-year to 2.74 million units this year, according to industry watchers.