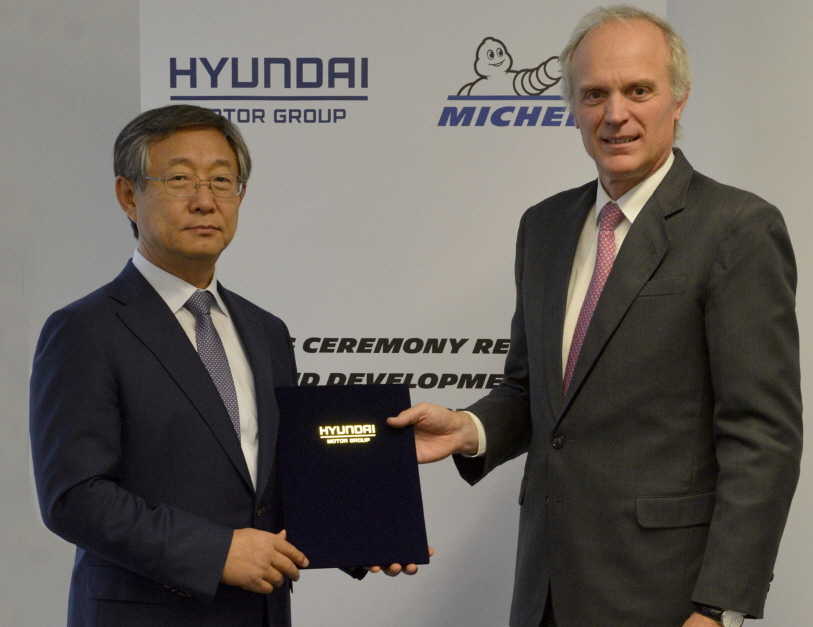 The tie-up agreement on technological cooperation was signed between Yang Woong-cheol, a Hyundai Motor vice chairman, and his Michelin counterpart Florent Menegaux at Michelin’s Research and Development Center in Clermont-Ferrand in central France.

The deal calls for the joint development of all-season tires to be installed in Hyundai Motor’s electric car models that will hit the market after 2020. The companies will also expand cooperation in the exchange and education of researchers.

“The tie-up will enable Hyundai Motor to share the technological prowess and knowhow of one of the world’s best tire manufacturers,” a Hyundai official said. “Through active personnel and technological exchanges, Hyundai Motor and Michelin will start to develop tires optimized for electric vehicles.”

In an effort to diversify its lineup and satisfy a growing appetite for emissions-free cars, Hyundai Motor has been ramping up efforts to develop electric vehicles. The company unveiled the all-electric Ioniq in June last year, which can travel 191 kilometers on a single charge and gets the equivalent of 136 miles per gallon. It plans to launch the electric version of the Kona subcompact SUV in early 2018.