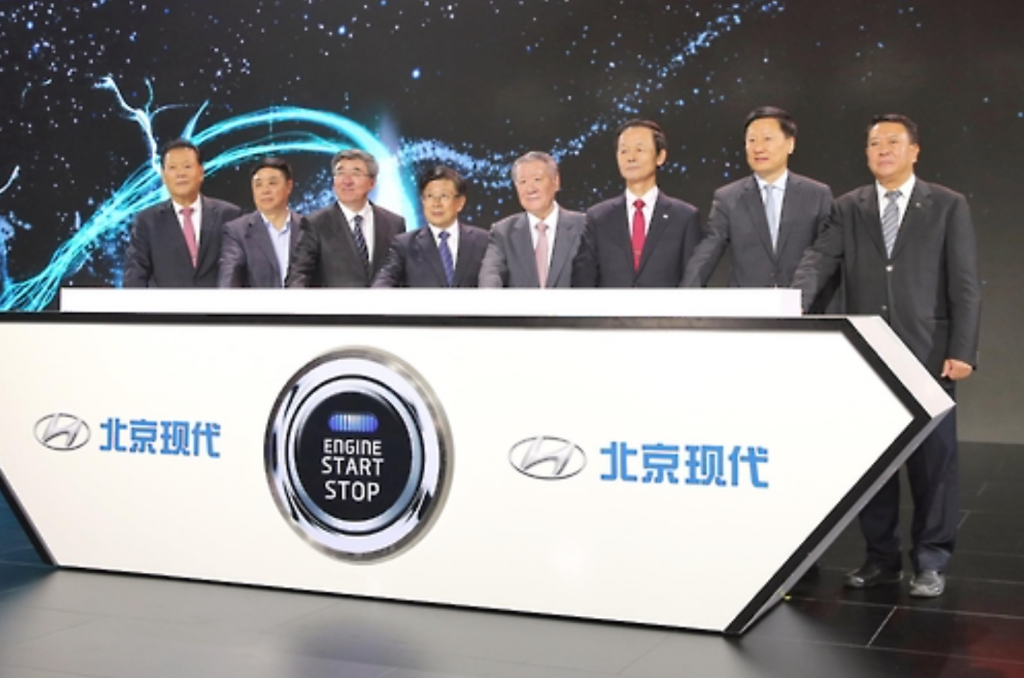 Chung Mong-koo (fourth from R), chairman of South Korea’s Hyundai Motor Group, poses for a photo at a ceremony held in China’s Cangzhou to mark the construction of a new production facility in the Chinese city on Oct. 18, 2016. (image: Yonhap)

SEOUL, Oct. 18 (Korea Bizwire) – South Korea’s top automotive group Hyundai Motor Group will work to expand its presence in the Chinese market with its overall production capacity there expected to reach 2.7 million vehicles per year in 2018, the automaker said Tuesday.

The plan was announced at a ceremony, marking the construction of a new production facility in Cangzhou, Hubei Province.

“As a symbol of economic cooperation between South Korea and China, Beijing Hyundai breached the 8 million mark in production in August, and with the opening of the new Cangzhou plant with an annual capacity of 300,000 cars, Hyundai Motor Group now has eight production facilities with an annual capacity of 2.4 million vehicles in China,” Group Chairman Chung Mong-koo was quoted as saying at the ceremony held in the eastern Chinese city of Cangzhou.

The Cangzhou plant is Hyundai Motor Co.’s fourth production facility in China, and the eighth overall for the automotive group that also has South Korea’s No. 2 automaker Kia Motors Corp. under its wings.

“The Cangzhou plant is the most advanced, environmentally friendly and smart facility that will produce cars of the highest quality for Chinese consumers, including the new Hyundai Verna,” the company said in a press release.

“With the launch of the Cangzhou plant, Beijing Hyundai will take a great leap forward,” it added.

Hyundai Motor Group is also building an additional facility in Chongqing that will add an additional 300,000 cars to its overall production capacity in China before the end of next year.

Globally, the South Korean automotive group now has an annual production capacity of 8.78 million, with the new plant in Chongqing, set to open early next year, expected to put its global output at over 9 million for the first time in its history.

The stepped up efforts to expand the group’s market presence in China come as the world’s second-largest economy has already become the world’s largest market for automobiles with its annual sales of passenger vehicles alone expected to breach the 20 million mark this year.

“By becoming the first joint venture firm in China to build a production facility in Hubei Province, Beijing Hyundai seeks to strengthen its market status as a leading brand in China’s capital region while actively preparing to meet new and growing demands stemming from China’s rapid economic growth,” the group said.