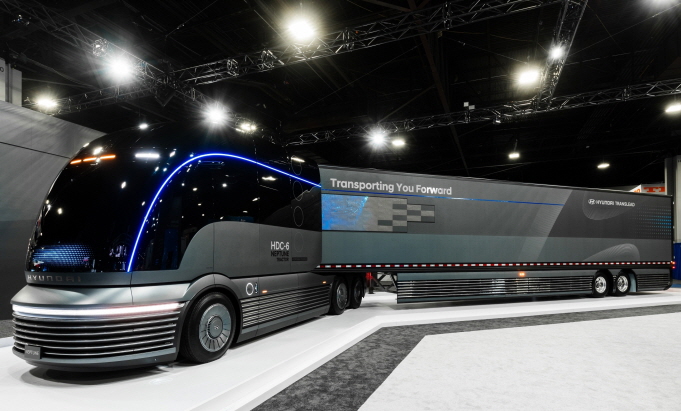 SEOUL, Oct. 29 (Korea Bizwire) — Hyundai Motor Co. said Tuesday it has debuted a hydrogen-powered truck concept in the United States as part of its efforts to sell its zero-emission trucks in the world’s most important automobile market.

“Today at this show, by showing the HDC-6 Neptune, the first hydrogen-only concept for Hyundai Motor’s commercial vehicles, we will start exploring opportunities in the U.S. commercial vehicle market,” said Edward Lee, head of the Hyundai Commercial Vehicle Business Division.

“Furthermore, we are willing to work with other partners to pave the way to establish a hydrogen ecosystem for commercial vehicles.”

The truck concept is part of Hyundai’s plan to take a leadership role in the road to a decarbonized society and the advancement of zero-emission vehicles, the statement said.

The fuel cell electric truck only emits water vapor as it converts stored hydrogen into electricity, which turns the vehicle’s motor.

Global carmakers have been racing to go eco-friendly amid tightened regulations on emissions of greenhouse gases that scientists say are to blame for global warming.

The maker of the Sonata sedan and the Palisade SUV is now moving to make a presence with its hydrogen vehicles in the U.S.

Hyundai Motor Group, which aims to morph into a future mobility solutions provider, announced in December that it will invest 7.6 trillion won (US$6.7 billion) in hydrogen car-producing facilities and related research and development activities by 2030.

Hyundai had sold an accumulated 2,400 Nexo hydrogen models in the global passenger car markets as of the end of July.