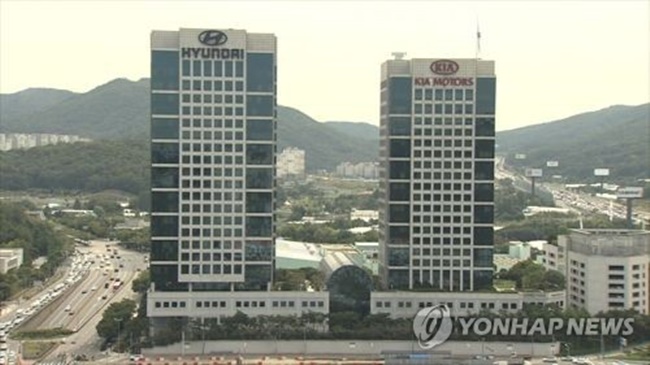 The move comes as Hyundai Motor Co. and Kia Motors Corp., the group’s two major affiliates, said they may consider buying another company to better secure a future growth engine. But due to various fair trade rules, mergers and acquisitions are harder under a holding company structure, analysts said. (Image: Yonhap)

On Wednesday, the country’s biggest carmaker announced it will spin off the module manufacturing and after-sales parts business of auto parts maker Hyundai Mobis Co. and merge it with logistics firm Hyundai Glovis Co. to enhance the cross-shareholding structure of its affiliates, which has taken flak for not being transparent.

The move comes after the antitrust regulator ordered the auto group to come up with a concrete plan to improve its complicated governance structure by the end of March. Originally, it was thought the automotive group may adopt a holding company, but management decided to take another route.

The move comes as Hyundai Motor Co. and Kia Motors Corp., the group’s two major affiliates, said they may consider buying another company to better secure a future growth engine. But due to various fair trade rules, mergers and acquisitions are harder under a holding company structure, analysts said.

Affiliates in a holding company structure are not allowed to jointly engage in mergers and acquisitions.

The business group then can build up the competitiveness of Hyundai Mobis to focus further on beefing up its core auto parts operations and develop future growth drivers such as autonomous vehicles.

Hyundai and Kia will focus on vehicle production and sales.

All the plans are subject to approval at Hyundai Mobis and Hyundai Glovis general shareholder meetings scheduled for May 29. If approved, the spin-off merger is expected to go into effect in early July.

Besides giving them leeway in business decisions, the move can be seen as Hyundai Motor Group fulfilling its “social responsibility” by giving back to the people the benefits it enjoyed as one of the country’s leading conglomerates, as the Chungs are expected to pay more than 1 trillion won (US$938 million) in taxes for the planned Hyundai Mobis stock purchases, a statement by the group said.