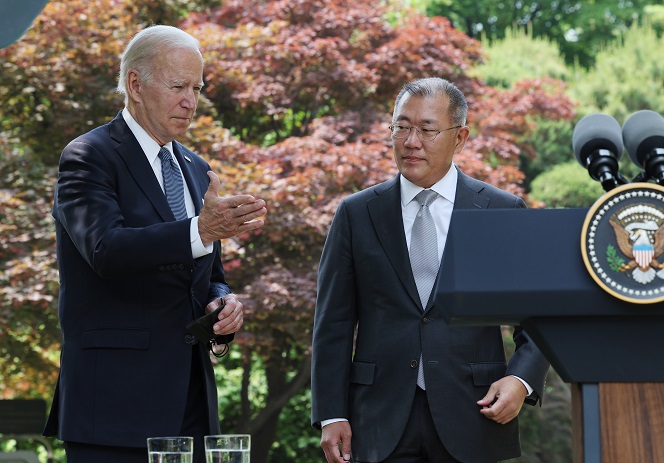 U.S. President Joe Biden guides Hyundai Motor Group Chairman Euisun Chung to the podium for the announcement of an additional investment in the U.S. at the Grand Hyatt Hotel in central Seoul on May 22, 2022. (Yonhap)

SEOUL, June 30 (Korea Bizwire) — Hyundai Motor Group said Thursday it is setting up a new investment affiliate in the United States, in a follow-up to its pledge to invest US$10.5 billion in the world’s largest economy.

The new affiliate, tentatively named HMG Global, will be established in Delaware and funded by Hyundai’s three flagship arms — Hyundai Motor Co., Kia Corp. and Hyundai Mobis Co., according to regulatory filings posted by the companies.

“The establishment of the new affiliate will enable us to more quickly invest in companies with new technologies in the United States, home to many innovative companies, and we are expected to manage them efficiently,” the group said.

Hyundai Motor and its smaller affiliate Kia will together inject a combined $578 million in the new American unit. Hyundai Motor and Hyundai Mobis, the auto parts-making affiliate, will also transfer in kind their controlling shares in Boston Dynamics, a U.S. robotics company Hyundai acquired two years ago, to the new U.S. affiliate.

Hyundai Motor will thereby own 49.5 percent in the new affiliate, with Kia owning 30.5 percent and Hyundai Mobis’ share at 20.5 percent.

The new U.S. affiliate is expected to be launched around August following regulatory approval.

The move came as a follow-up to Hyundai’s announcement in late May it will spend $5.5 billion to build electric vehicle and battery cell plants in Georgia.

The announcement was made while U.S. President Joe Biden was visiting South Korea for a summit with President Yoon Suk-yeol.

Hyundai Motor Group Chair Euisun Chung, who met one-on-one with Biden in Seoul in May, pledged an additional $5 billion investment in the U.S. market to push for future growth engines ranging from robotics and urban air mobility to self-driving technology.