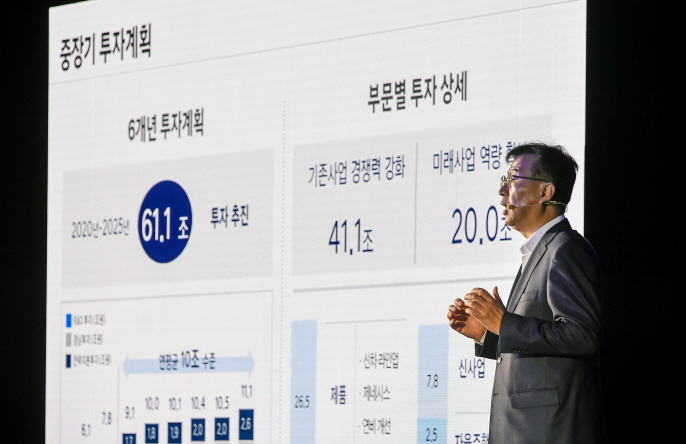 Hyundai Motor President Lee Won-hee delivers a briefing on its 61-trillion-won investment plan for the next six years at a road show held at Conrad Hotel in Seoul on Dec. 4, 2019. (image: Hyundai Motor)

The decision is designed to enhance the competitiveness of its existing car manufacturing business and generate new business opportunities by investing in future mobility technologies, Hyundai said in a statement.

Hyundai plans to inject 41 trillion won in the existing business and 20 trillion won in new technology in a bid to transform itself into a “smart mobility solutions provider,” it said.

“We are reorganizing our business portfolio to meet rapidly changing customer demands, with a focus on smart mobility products and services over the next six years,” Hyundai Motor President Lee Won-hee said during the CEO Investor Day, the second road show of the year, held in Seoul for shareholders, analysts and credit rating firms.

On top of the new investment, Hyundai said it will buy back 300 billion won worth of its shares by February to improve shareholders’ value.

The broader KOSPI fell 0.7 percent due to concerns about the U.S.-China trade negotiations.

The maker of the Sonata sedan and the Palisade sport utility vehicle aims to rank third in the global electric and hydrogen fuel-cell electric markets in 2025.

As global rivals, such as Volkswagen AG increase investments in low-emission and battery-powered vehicles as part of their electrification strategy, Hyundai plans to introduce massive numbers of electric and hydrogen vehicles in Korea, the United States, China and Europe from 2030 and in emerging markets such as India and Brazil from 2035, the statement said.

To diversify its lineup, Hyundai said it will launch a battery-powered vehicle under the independent Genesis brand in 2021 and expand the number of electric models by 2024.

If the investment goes smoothly as planned, it will help Hyundai achieve a share of 5 percent in the global automobile market in 2025, up from 4 percent in 2018, the company said.

From January to September, Hyundai’s net profit jumped 31 percent to 2.41 trillion won from 1.85 trillion won in the year-ago period on a weak won and robust sales of sport utility vehicles.

Hyundai sold a total of 3.23 million vehicles in the first nine months of 2019, achieving 70 percent of its annual sales target of 4.68 million units this year.