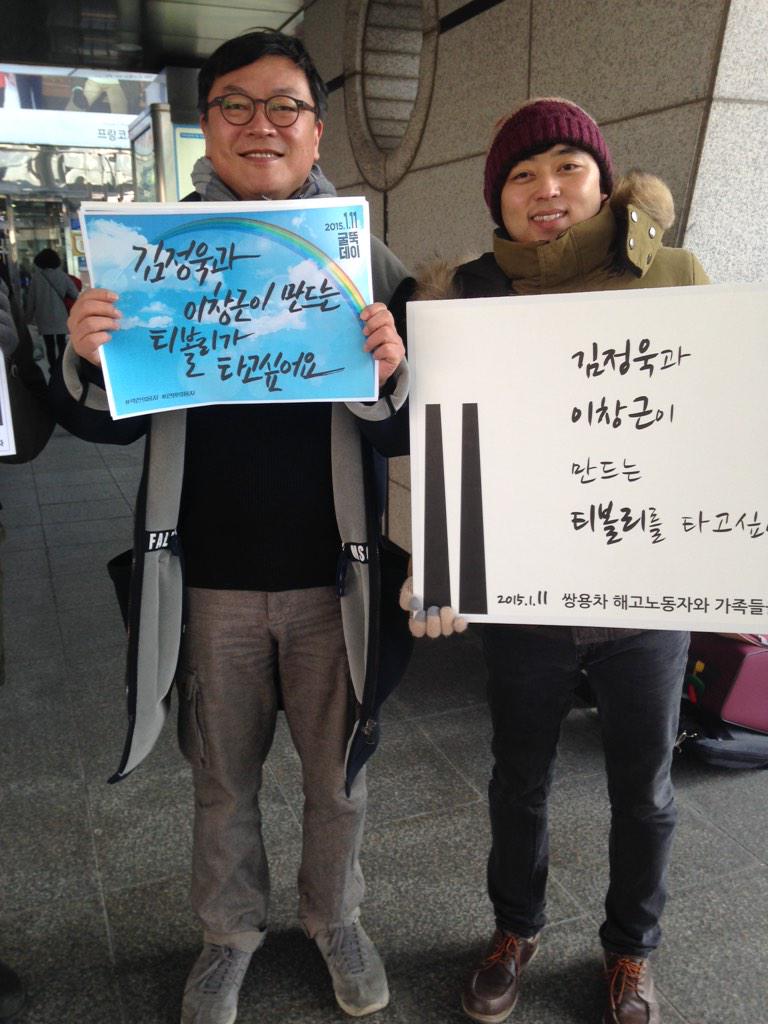 The demonstration was proposed online by Kim Eui-sung(left), an actor in his fifties, who has been picketing since December 15, 2014 in support of Ssangyong’s fired workers. (image: Kim Eui-sung’s Twitter)

SEOUL, Jan. 12 (Korea Bizwire) — The 11th of January was an important day for the Korean labor movement. Dubbed “Chimney Day,” the day saw a series of rallies of one-man picketers across the nation.

The demonstrators were showing support for the reinstatement for Kim Jeong-ook and Lee Chang-geun, two fired workers from Ssangyong Motor. They have been in a ‘sit-down’ strike since December 13, 2014 at a chimney of Ssangyong’s plant in Pyeongtaek, demanding that Ssangyong motor provide more communication between fired workers and the company.

Lines of protestors supporting Ssangyong’s fired workers also walked down the streets next to subway and train stations on January 11. One-man demonstrations were also spotted at Seoul’s main districts and metro cities such as Gwanghwamun, City Hall, Dangsan, Hapjeong, Seoul National University of Education and Bupyeong.

Demonstrations could also be seen in other cities such as Busan, Daejeon, Kwangju and Jeonju. People also supported the fired workers from their homes and offices.

At 2 o’clock on January 11, social networks in Korea were flooded with hashtags concerning Ssangyong and the picketers. ‘# Chimney Day’ was one of the most popular hashtags at the time. Pictures of picketers were also popular on SNS with tags such as #Ssangyong motor. One of the popular tags was #tivoli. Tivoli is the name of Ssangyong’s upcoming SUV, and picketers supported the fired workers with words such as “we want to ride a Tivoli made by Kim Jeong-ook and Lee Chang-geun” or “Ssangyong should provide chances to the fired workers in order to appeal to customers.”

The demonstration was proposed online by Kim Eui-sung, an actor in his fifties, who has been picketing since December 15, 2014 in support of Ssangyong’s fired workers.

The Tivoli, the first new car from Ssangyong since it was taken over by Indian car manufacturer Mahindra & Mahindra, will be launched on January 13. Lee Yu-il, CEO of Ssangyong, said in October 2014 that he would consider the reinstatement of the fired workers if sales of the Tivoli alone reach more than 120,000 in a year. In 2014, Ssangyong sold a total of 140,000 vehicles.