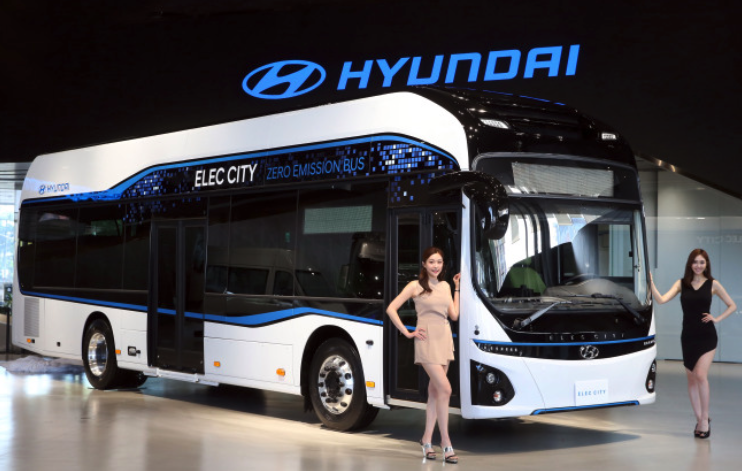 The new bus, mated with a 256 kilowatt-per-hour battery, can run 290 kilometers on a single charge that takes 67 minutes. A 30-minute charging allows it to run 170 kilometers, the company said in a statement. (image: Hyundai)

The move is part of the carmaker’s efforts to diversify its lineup with environmentally friendly vehicles and enhance its brand image in global markets where clean modes of transportation have emerged a key point in auto manufacturing.

Hyundai Motor unveiled the Elec City, its first mass-production electric bus, at the Truck & Bus Mega Fair, a local commercial vehicle exhibition kicked off by the carmaker this year.

“There still remain things to be improved in terms of the charging infrastructure for pure electric vehicles,” Tak Yeong-duck, senior vice president of Hyundai’s Commercial Vehicle R&D Dvision, told Yonhap News Agency on the sidelines of a press conference held before the four-day exhibition kicked off on Friday afternoon.

“But we have decided to launch the Elec City next year as the government plans to increase the number of charging stations in the coming years.”

The senior vice president expected pre-orders of about 10 Elec City buses this year ahead of its official launch early next year.

The electric bus is likely to carry a price tag of more than 200 million won (US$179,000) per vehicle that does not factor in the central government’s subsidy worth 100 million won. The prices may go down depending on additional subsidies offered by provincial governments, Hyundai officials said. 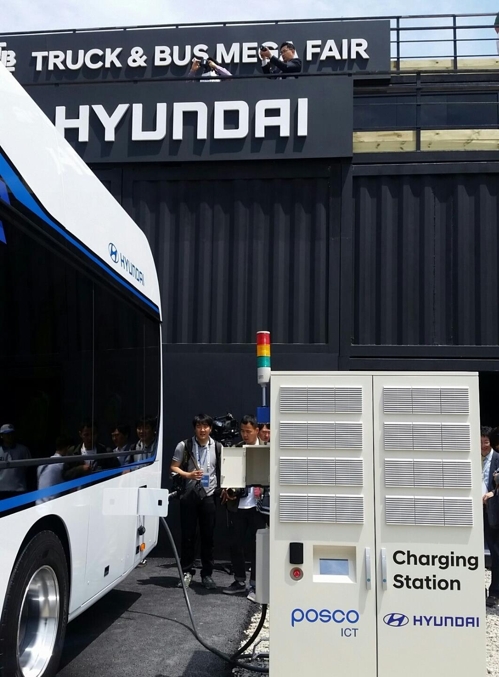 Hyundai has developed the Elec City over the past eight years in a move to replace its existing commercial vehicles with more environment-friendly models.

The new bus, mated with a 256 kilowatt-per-hour battery, can run 290 kilometers on a single charge that takes 67 minutes. A 30-minute charging allows it to run 170 kilometers, the company said in a statement.

Previously, the maker of the Sonata sedan and the Santa Fe sport-utility vehicle had unveiled two versions of the “zero-emission” electric bus in pilot projects. But the lack of chargers was the main hurdle for stimulating real demand in Asia’s fourth-biggest economy.

In the mega fair, 53 suppliers attended to showcase more than 100 lineups. For visitors, there will be performances by special equipment vehicles and test-drive opportunities, the statement said.

With the start of the emission-free Elec City, Hyundai is targeting to improve the fuel efficiency of its commercial vehicles by up to 30 percent by 2020.

Still, Hyundai still lags far behind its global rivals such as MAN Truck & Bus and Daimler Trucks from Germany, Volvo Trucks from the U.S., Scania AB from Sweden and Iveco from Italy in terms of brand awareness and sales.

These foreign carmakers are expected to present more localized products for Korean customers as they see further room for growth here.

There is no official data compiled by a local industry association as sales figures from imported commercial carmakers are not available, a Hyundai spokesman said.