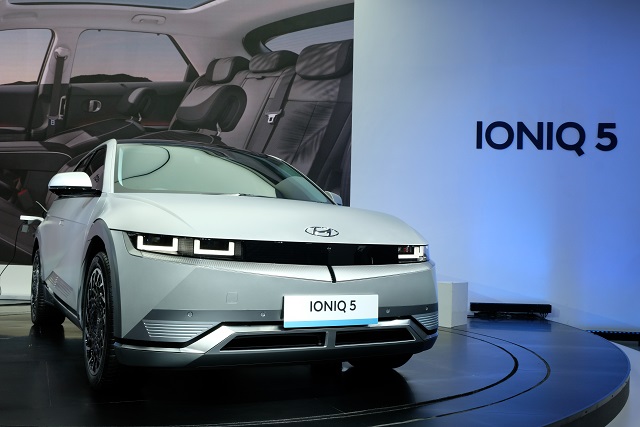 This photo taken on May 1, 2022 and provided by Hyundai Motor shows the IONIQ 5 model.

Hyundai sold 196 EVs — 195 units of the IONIQ 5 and one unit of the IONIQ Electric — in the Southeast Asian market in May, according to the Association of Indonesia Automotive Industries (GAIKINDO).

Hyundai accounted for 98 percent of the entire 200 units of EVs sold in Indonesia last month, it said.

In the January-May period, Hyundai’s EV sales reached 333 units, or 92 percent of overall sales of 363 EVs there, the association said.

In 2022, Hyundai aims to increase its market share in the Indonesian automobile market from a share of 0.3 percent last year. It, however, didn’t provide a targeted market share.

In the five-month period, Hyundai’s share jumped to 2.4 percent helped by the localized Creta SUV and EV models.

Hyundai invested US$1.55 billion to build a 150,000-unit-a-year plant in Indonesia, and began to produce the Creta SUV in January and the pure electric IONIQ 5 in March.

To boost local sales, Hyundai plans to launch the Stargazer multipurpose vehicle in Indonesia during the third quarter.