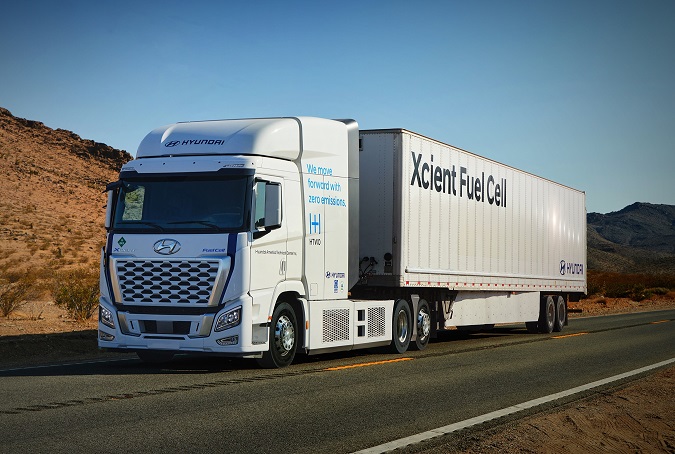 Hyundai Motor Co.’s Xcient fuel cell heavy-duty truck is seen in this photo provided by the automaker on July 27, 2021.

SEOUL, July 27 (Korea Bizwire) — South Korean automaker Hyundai Motor Co. said Tuesday its fleet of 30 Xcient fuel cell trucks will hit roads in California by early 2023, which will be the largest deployment of zero-emission commercial vehicles in the United States.

Hyundai Motor said it will team up with public and private partners to deploy 30 Xcient heavy-duty trucks for regional freight distribution in Northern California by the second quarter of 2023.

A consortium jointly led by the Center for Transportation and the Environment and Hyundai Motor recently was awarded a total of US$29 million from two publicly funded projects aimed at improving air quality in the region.

The consortium also plans to establish a hydrogen refueling station in California to support as many as 50 trucks with an average fill of 30 kilograms, the automaker said.

The U.S. model provides a maximum driving range of about 800 kilometers, it noted.

Hyundai Motor was also awarded a $500,000 grant for a one-year pilot program to operate two Xcient trucks between warehouses in Southern California beginning in August.

To further expand its presence in the world’s largest commercial vehicle market, Hyundai said it has been in talks with multiple logistics and commercial companies for the deployment of Xcient trucks for their freight delivery services in the U.S.

Hyundai has been promoting its fuel cell commercial vehicles, which generate electricity from hydrogen and only emit water, as a clean alternative to diesel trucks, first making a foray into Europe last year.

The automaker has shipped 46 Xcient trucks to Switzerland since July 2020 and said it plans to roll out 1,600 fuel cell trucks in Europe by 2025.