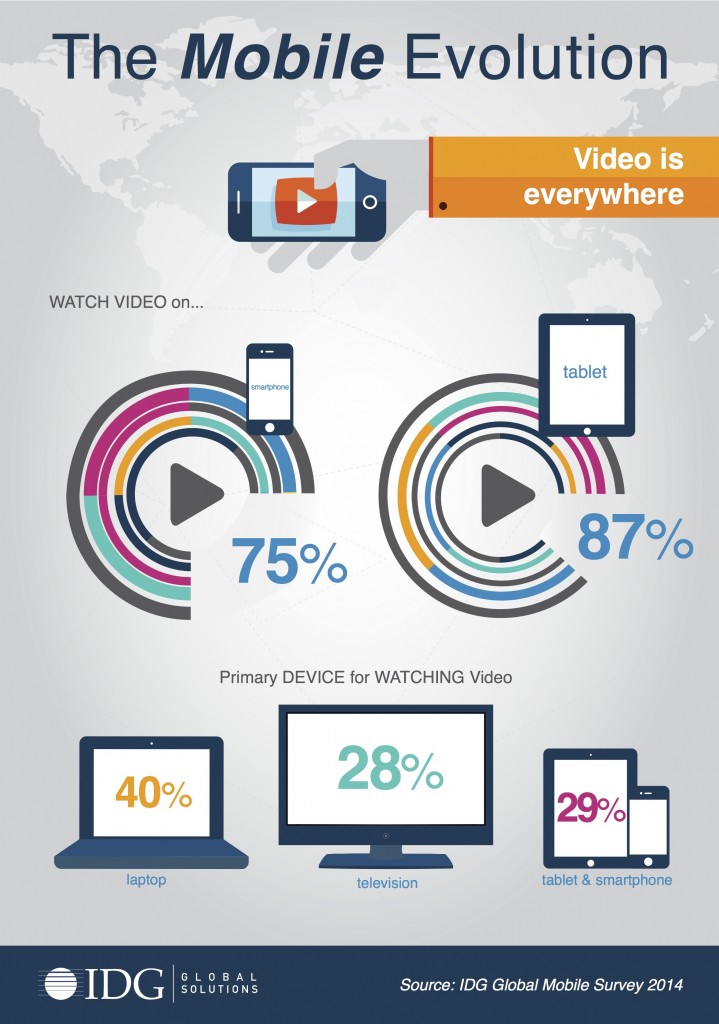 The survey, conducted among more than 23,500 executives and consumers across 43 countries, focuses on four key areas:

The research also reveals that video consumption has become pervasive on mobile devices, with 75% of respondents using smartphones and 87% tablets to watch online video. Millennials and C-suite executives, meanwhile, are near equal consumers of tablet video with 92% of 18- to 34-year-olds and 91% of senior executives (CEO/COO/Chairman/President) reporting they watch video on their tablet. Both audiences access all kinds of video content—including YouTube, movies, TV shows and training guides—although, senior executives are nearly twice as likely as Millennials to watch promotional videos.

“The ‘mobile evolution’ is having a profound effect on consumers and businesses,” said Christina Carstensen, IDG Global Solutions. “It has kick-started the ‘always-on’ culture, presenting brands with unprecedented opportunities to develop closer relationships with their customers. We have moved beyond media convergence to a convergence of technology and humans, and brands more than ever need to show their human side to communicate in a relevant, engaging and intuitive way.”

For senior executives, smartphones are a critical business tool. The majority of senior executives (92%) own a smartphone used for business, with 77% reporting they use their smartphone to research a product or service for their business. While the majority (93%) go on to purchase that product via the Internet using a laptop or desktop, 50% of these executives have purchased IT products for business using their smartphone, with 13% reporting making a purchase between $1,000 to $4,999 (£600–2,999; €700–3,499).

Security concerns (45%) and having a website not mobile enabled (43%) were the most common reasons for this audience not to purchase a product via smartphone. Like mainstream consumers, senior executives want an omni-channel purchase environment to seamlessly move between devices to make IT purchases.

Tablet ownership has exploded among survey respondents, rising from 20% in 2011 to 61% in 2014. In Latin America, 41% of respondents said their tablet had replaced their laptop computer, with 59% reporting using their tablet device to purchase IT products for their business, the highest percentage of all regions surveyed. Software and computer accessories were the IT products most frequently purchased for business across all regions, reflecting significant opportunity for IT companies willing to invest in mobile commerce innovations such as shoppable video.

To reach these audiences, tech marketers are now competing with mainstream brands on Facebook or trying to grab their audience’s attention during television programs. B2B brands investing in quality social content or video with high production values comparable to television are most likely to engage young influencers and stimulate social media shares.

International Data Group (IDG™) is the world’s leading technology media, events and research company. Founded in 1964 and headquartered in Boston, Massachusetts, IDG products and services reach an audience of more than 280 million technology buyers in 97 countries.

A recognized leader in conference and exhibition management, IDG produces more than 700 globally branded technology and entertainment conferences and events in 55 countries.

International Data Corporation (IDC®), a subsidiary of IDG, has more than 1,000 analysts who provide global, regional, and local expertise on technology and industry opportunities and trends in more than 110 countries.

Additional information about IDG is available at http://www.idg.com.