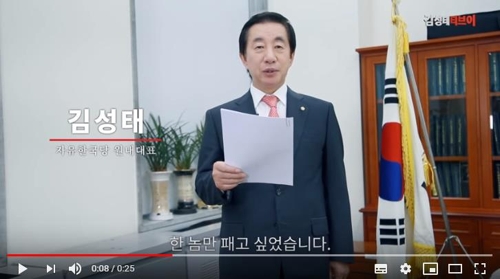 Kim Sung-tae, the floor leader of the main opposition Liberty Korea Party, speaks in the first video for his YouTube channel on Oct. 11, 2018. (Yonhap)

SEOUL, Nov. 22 (Korea Bizwire) – In a 1999 hit comedy movie, a hooligan protagonist brags of his secret to confronting several enemies at once alone: “Beat only one guy.”

The infamous phrase is now the title of a series of political shows featured on the YouTube channel run by Kim Sung-tae, the floor leader of the main opposition Liberty Korea Party (LKP).

“I did want to beat only one guy,” Kim quipped in one of the most popular episodes of Kim Sung-tae TV, unleashing a torrent of attacks on the liberal Moon Jae-in government’s policies.

“But there are so many issues popping up that in this funny situation one guy isn’t enough. I am looking forward to meeting you, and I will beat these issues every week.”

The conservative lawmaker started the outlet last month, joining a growing number of politicians tapping into YouTube to promote their agenda and reach out to voters.

YouTube is the most favored video-sharing platform in the nation. Korean users of Android-based smartphones spent a total of 33.3 billion minutes using YouTube in August, up 42 percent from a year earlier, according to a survey by WiseApp, a local mobile app tracker.

The platform is being used by almost all age groups, with even those in their 50s and older watching YouTube for a combined 6.4 billion minutes, longer than the 5.4 billion minutes spent using Kakao Talk, the country’s top mobile messenger, it showed.

Some savvy politicians are already highly popular on the site.

Rep. Jun Hee-kyung of the LKP started the YouTube channel named Jun Hee-kyung and the Power of Freedom in 2016, with the number of subscribers currently standing at nearly 40,000.

The channel by Rep. Lee Un-ju of the minor opposition Bareunmirae Party has attracted more than 38,000 subscribers just three months after its opening. Lee Un-ju TV is apparently going viral as Lee, who defected from the ruling Democratic Party (DP) a year ago, is emerging as a new conservative icon with sharp attacks on the liberal administration and politicians.

In the liberal bloc, Rep. Sohn Hye-won of the DP runs the Mapo Eul District, Sohn Hye-won channel with nearly 30,000 subscribers. Her videos feature discussions with invited experts on issues ranging from the economy to history.

Rep. Sim Sang-jeung, former head of the leftist Justice Party, has some 7,800 YouTube subscribers, but her channel has drawn more than 5 million combined views. The channel, Welcome to Sangjeung Land, contains advertisement parody videos and footage containing her sharp criticism against the establishment.

“The main platforms for politicians’ exposure to the public have evolved from terrestrial TV networks to cable TV and Internet portal sites. In an era of one-person media, politicians are jumping on the YouTube bandwagon,” Ko Jin-dong, a political analyst, said. 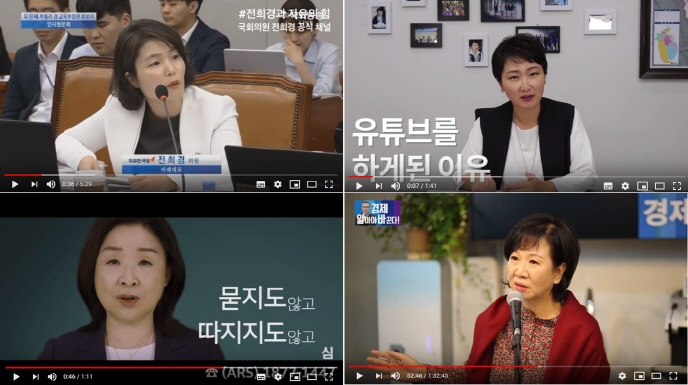 Among political parties, the main opposition LKP is at the forefront in tapping YouTube. It apparently seeks to make up for their lagging behind in social media such as Twitter and Facebook, which are dominated by young, liberal voters.

“After the liberal government took office last year, the conservative establishment has been discontent that their opinions are not fully covered by the existing media. That’s why YouTube emerges as an alternative for them,” Yu Chang-seon, a political analyst, said.

In 2012, the LKP started its official YouTube channel Oreun Sori, which has the dual meaning of right sounds and the voice of right-leaning people. The channel has about 30,000 subscribers.

The LKP uploads videos promoting its party line and denouncing the government’s policies, such as President Moon Jae-in’s peace initiative with North Korea and his signature “income-driven growth” policy.

“The main subscribers for our channel are those in their 50s. For them, YouTube is an attractive platform as any smartphone users can easily use it,” Ahn Il-ho, head of the LKP’s broadcasting team, said. 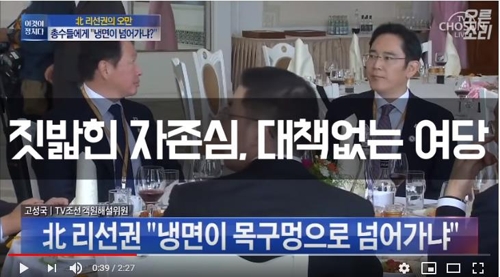 This image, captured from footage on the Liberty Korea Party’s YouTube channel on Nov. 7, 2018, shows the main opposition party’s criticism against the liberal government and the ruling party on the North Korea issue. (Yonhap)

The ruling DP belatedly jumped into the YouTube arena for its promotion in the midst of its battle against YouTube footage containing what it has called fake news.

In October, the party requested the local unit of Google Inc. delete more than 100 YouTube videos which it claims contain malicious fake information.

Prime Minister Lee Nak-yon earlier ordered government measures to tackle the spread of fake news, which he said is disturbing democracy in the name of free speech.

But the DP has recently changed its tact, apparently mindful of the LKP’s YouTube strategy.

The liberal party started its new YouTube channel SSM on Nov. 11, which it said means usefulness and versatility, in reference to its efforts to be a dynamic party.

The DP already ran an official YouTube channel, but it effectively fizzled out with some 9,000 subscribers. The new channel has drawn nearly 15,000 subscribers since it started.

“We will only upload content that has authenticity. If not, we will kick them out,” Lee told reporters on the channel’s opening day when asked about criticism that the DP seeks to promote itself with YouTube amid its row over fake news. 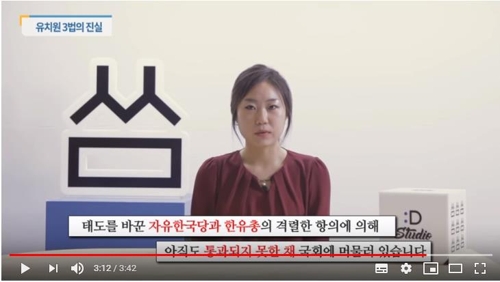 This image, captured from footage on the ruling Democratic Party’s YouTube channel on Nov. 16, 2018, shows a party official checking facts about bills to curb corruption at private kindergartens. (Yonhap)

Some critics said that politicians’ YouTube channels could focus on instigating content that only caters to their supporters. But others said that it is hard to regulate freedom of expression if political content on YouTube does not have libel or fake information.

Parties’ competition to take a bigger slice in the YouTube arena is likely to heat up further ahead of the 2020 parliamentary elections.

“We plan to produce videos that will highlight the government’s policy lapses and our role as the main opposition party,” Ahn of the LKP said.

Rep. Kwon Chil-seung, the DP’s chief in charge of communication strategy, said that the party will take a dual-track approach on YouTube — delivering accurate information while keeping up its battle to root out fake information.

“We are aiming at securing an overwhelming number of subscribers among political parties’ YouTube channels,” Kwon said.