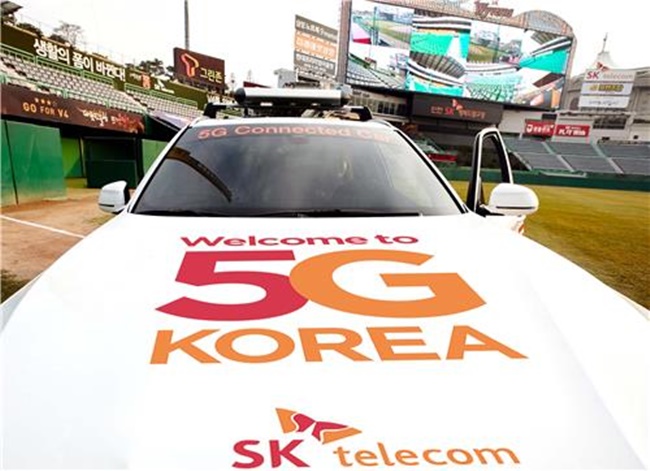 For the operation of the T5, SKT’s 5G trial network, which runs on the 28 gigahertz band, was set up at the stadium. (Image: SKT)

Dubbed the “5G Stadium”, the home stadium of the SK Wyverns will be transformed this weekend into a venue to showcase various services using 5G technology, including connected cars and virtual reality (VR).

On Friday, after the ceremonial first pitch takes place, the SK’s T5 connected car will make an appearance on the field and transmit video via a 5G network. Last November, the T5 successfully ended testing on Yeongjongdo Island in Incheon.

For the operation of the T5, SKT’s 5G trial network, which runs on the 28 gigahertz band, was set up at the stadium.

Near the outfield seats by first base, a “360 Live Zone” will be installed where spectators can watch the baseball game through VR devices connected to eight live-stream cameras around the stadium.

Using Ultra HD Premium MultiView technology, SKT will be streaming video footage of the audience from various angles via smartphones and display boards.

Spectators will also be able to enjoy the augmented-reality experience through the SK Wyverns app “PLAY With”, through which users can capture the stadium with their camera to check the weather and receive information and record of players.

The significance of the “5G Stadium” lies in the fact that 5G technology is now being put to use for the public to experience and enjoy, unlike in the past when similar technology was only used for exhibitions or research purposes, SKT said.

As a daily average of 20,000 baseball fans are expected to visit the stadium over the three-day opening weekend, SKT is expected to use its 4G LTE network for other trial services besides the T5 connected car.

Park Ji-hyo, the head of SKT’s Network Research & Development Center, said, “Building the 5G stadium will stimulate demand and the popularization of the 5G network. We will make the success of 5G Stadium known internationally, and help South Korea lead the global standard of 5G technology.”

SKT has set an eye on commercializing a 5G network for the first time in the world by 2019, with the slogan “Welcome to 5G Korea”.