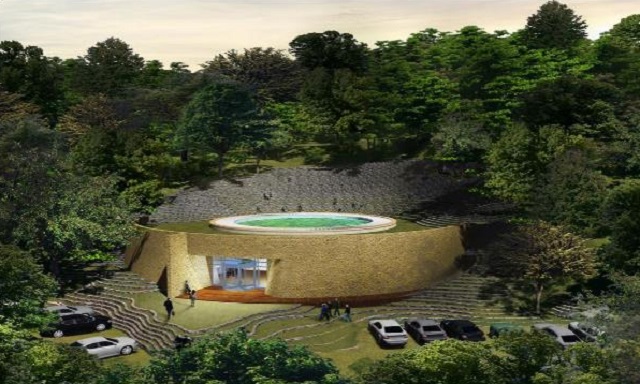 This image, provided by the Incheon city government, shows an artist’s conception of a park and museum commemorating Yi Seung-hun to be built in the city.

The city government and the Diocese of Incheon signed an agreement to build a historical park and museum by June 2022 around the graveyard of Yi, who became the first Korean baptized as a Christian in 1784.

The municipality will construct the park on 45,000 square meters of land with a budget of 9.6 billion won (US$8 million).

The diocese will build the Catholic history and culture museum, expected to cost 4.8 billion won, in the park.

The park and museum will serve as a site for pilgrimage and historical and cultural experiences, Mayor Park Nam-chun said.

Yi, born in 1756, was christened by a missionary during a trip to Beijing in 1784. His baptismal name was Peter.

He returned home to Korea the following year and spread Catholicism, making Korea the only non-Western country where the Catholic Church was founded by its own citizens and not by foreign missionaries.

Yi was martyred along with hundreds of people in 1801 during the Sinyu Persecution, the first major repression of Catholics in the country.

His family produced five martyrs over four generations, a rarity in Catholic history.

Incheon designated Yi’s graveyard in its southeastern ward of Namdong as a municipal monument in 2011.