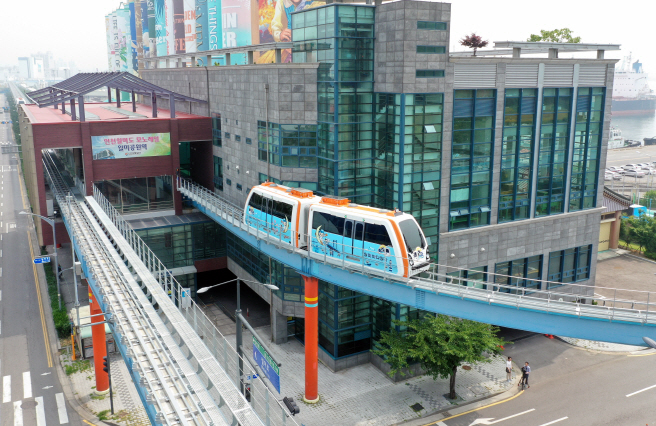 The operation of the Wolmi Sea Train will begin in the port city’s Wolmi Island district at 4 p.m. Tuesday after an opening ceremony to be attended by Mayor Park Nam-chun, municipal officials and citizens, they said.

Under the Wolmi Sea Train service, a two-car monorail train will run a 6.1-kilometer section of four stations — Incheon Station, Entrance to Wolmi Park, Culture Street and the Immigration Museum — carrying 46 passengers per ride, or 950,000 passengers a year, they said.

The sea train will run throughout Wolmi Island at a speed of 14.4 km per hour from 10 a.m. to 6 p.m. or 9 p.m. six days a week, excluding Mondays, and take about 35 minutes to travel through the entire route.

The Wolmi Sea Train project has been pushed as an alternative to the Wolmi Galaxy Rail project, which was completed in 2009 but scrapped in 2016 due to concern about safety problems.

Incheon Transit Corp., the operator of the Wolmi Sea Train, said it will do its best to turn the seaside monorail train into one of the city’s top tourist attractions.

Wolmi Island, located roughly 1 km off the coast of Incheon and about 50 km west of Seoul, attracts many people particularly during weekends due to a number of attractions, including street art performances, a theme park featuring the Apollo Disco and Viking rides and many cafes and seafood restaurants.