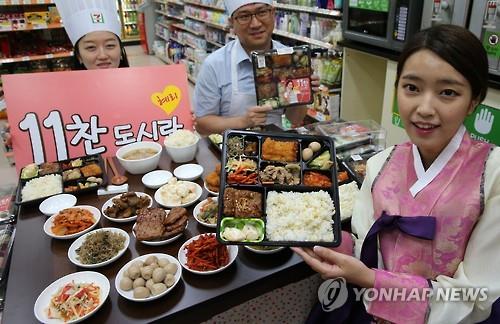 The HMR market, which the convenience stores are focusing on, increased in size to 1.3 trillion won last year, and is expected to grow further to reach 2 trillion won. (image: Yonhap)

SEOUL, July 20 (Korea Bizwire) – With the increase of so-called “home alone” people or single-person households, a wave of change is coming to Koreans’ consumption patterns, and it is affecting the stock prices of related industries.

Restaurants or karaoke rooms for one visitor are already thriving in Korea, and various ‘home alone’ products such as home meal replacements (HMR) are actively being introduced in the market. Following these trends, sales in related industries, including convenience stores, that are keeping pace with the changing consumption patterns are booming, and stock prices are skyrocketing.

According to WISEfn and industry analysts, GS Retail and BGF Retail, who run convenience store chains GS25 and CU respectively, saw their stock prices double in the first half of the year. Since the beginning of this year, the share price of BGF Retail soared 164 percent from 76,500 won to 202,000 won. Shares of GS Retail went up 110 percent from 25,650 won to 54,000 won.

With the jump, securities firms raised target prices for the CVS industry as a whole.

An analyst at NH Investment and Securities said, “With easy accessibility and convenience, the CVS increased their sales from short-distance shoppers. In addition, development of products meeting new trends including HMR, small package products and private brands led to increased sales.”

According to Statistics Korea, the component ratio of single households was 23.9 percent in 2010, but it is expected to rise to 34.3 percent and be the most common type of household in 2035.