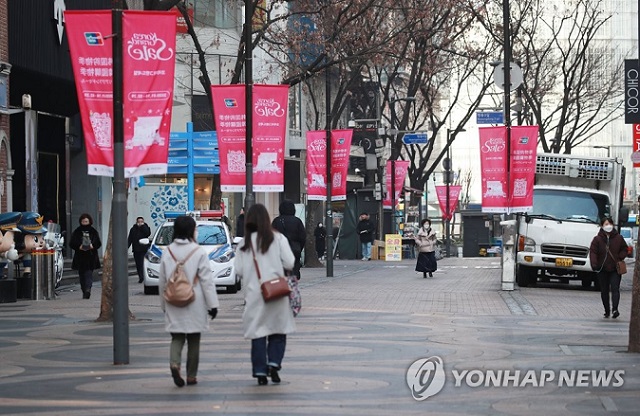 A few people walk on a street in Myeongdong in downtown Seoul on Feb. 8, 2020. The normally busy tourist district was nearly empty amid growing fears of the new coronavirus. (Yonhap)

The e-commerce market is rapidly expanding as “untact consumption,” referring to consumption without face-to-face contact, continues to gain popularity.

However, the service sector, where customers and employees have direct physical contact, such as hair salons, is on high alert.

The sales growth rate, in particular, reached 37.3 percent in the third week of February, and soared to 50.2 percent in the fourth week. This is the effect of the upgraded national crisis alert level to the highest level.

Broken down by product category, the demand for daily necessities has increased significantly.

According to the sales trends in major categories on the e-commerce platform 11th Street, sales of instant foods increased by 65 percent in February compared to January.

According to the growth rate of instant food sales on weekly basis, the first week of February saw a fall of 83 percent compared to the previous month, but jumped to 108 percent growth in the second, 186 percent in the third and 272 percent in the fourth week.

“As more companies are turning to telecommuting, people tend to stay indoors if circumstances allow because they do not have go to work,” said an industry insider.

“For the time being, there will be a steady increase in the number of consumers who only shop online.” 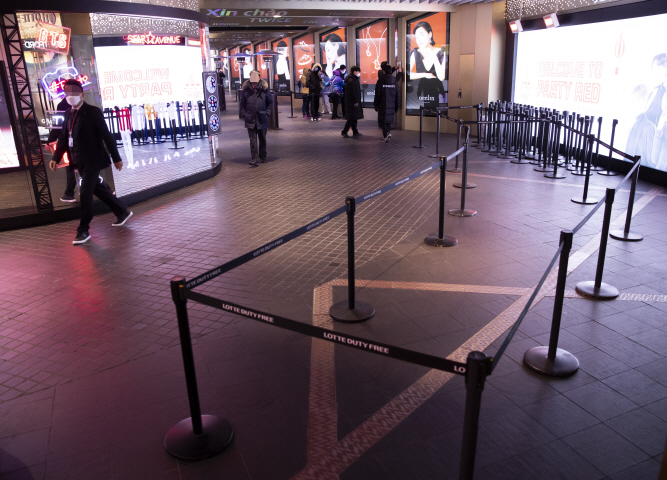 The waiting line in front of a Lotte Duty Free shop in central Seoul is empty on Jan. 29, 2020, amid escalating fears over the fast-spreading new coronavirus. (Yonhap)

Meanwhile, stores that require face-to-face contact have been cut off as people try to stay put at home with the concern of COVID-19 spreading.

A yoga center located in Gangseo District, Seoul, announced a week-long suspension of classes on Feb. 26, but decided to take another week off as the coronavirus crisis dragged on.

Such a decision was made because students gather in a small space to take classes, and instructors often have to physically interact with students for posture correction.

“The peak season for the wedding industry is March, April and May, and more than 95 percent of the weddings here have been postponed to June through December,” said a woman who works as a wedding planner in Daegu, the epicenter of the COVID-19 outbreak in South Korea.

According to the wedding planner, upcoming wedding ceremonies will be held as scheduled.

As such, wedding shops and workers that have direct contact with customers, such as fitting and dressing the bride and groom and doing hair and makeup, are voicing concern over their safety.

Hair salons are also seeing fewer and fewer customers. “The number of cancellations seems to increase as the week goes by,” said a hair stylist from a franchise hair salon located in Yangcheon District, Seoul.