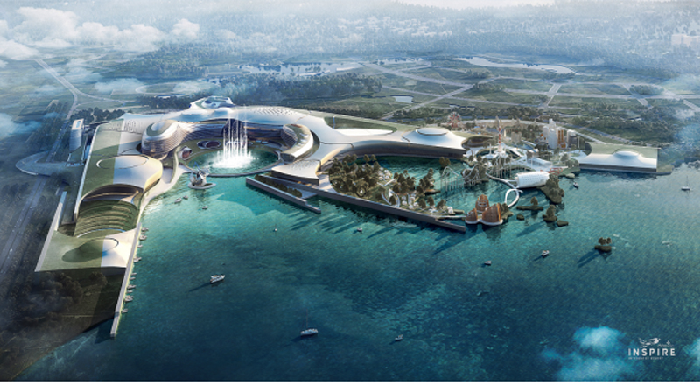 Rendering of Inspired Integrated Resort to be built on Yeongjong Island. (image: Ministry of Land, Infrastructure and Transport)

The agreement comes after Inspire in February won a bid to build an integrated resort with a 5.6 trillion won (US$5 billion) proposal.

“With the agreement, we have acquired the space to build the integrated resort,” Kang Yeon-sop, the chief of Inspire Integrated Resort, said during a signing ceremony. “We aim to present Northeast Asia’s largest resort, expecting about 10 million tourists annually.”

The consortium will invest 1.8 trillion won for the first stage project to build the nation’s largest foreigner-only casino, a hotel, a convention center, and a theme park as well as a wellness center and other amenities by 2020.

Bobby Soper, the president of the Mohegan Tribal Gaming Authority, said the new project will help Incheon Airport’s “airport city concept” by drawing tourists from around the world with the world-class resort.

There are 17 casinos in Korea with one open to locals. With the new license, the number of casinos in the country will increase to 20 by 2020.

Incheon airport handles more than 45 million visitors annually and is currently building an additional terminal to increase capacity to about 62 million passengers by 2017.