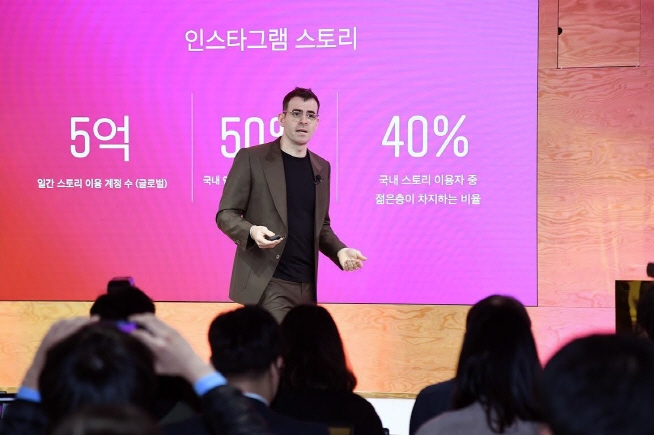 “K-pop is much more than just music,” CEO Adam Mosseri told reporters in Seoul, emphasizing the significance of the local market as an innovation powerhouse that leads trends around the world.

The company said K-Pop has been one of the most popular and most buzzed-about musical genres on Instagram in the past four years. Indonesia, United States and Brazil were among the top countries that interacted with K-Pop content on the platform.

“K-pop is not just a local phenomenon but a world phenomenon,” he stressed, adding that the company is trying to support connections between K-pop artists and global fans.

The former vice president of Facebook Inc., Instagram’s parent company, also highlighted the rise of casual sharing as a notable global trend in the way people express themselves.

“Our mission is to connect with people and things we love. To do any of that, you need to fundamentally express yourself,” he said.

Instagram Stories — a Snapchat-like feature that creates photo and video sequences that disappear within 24 hours — is a trend with over 500 million daily active accounts globally.

“High school- and college-aged made up 40 percent of daily Stories users (in South Korea),” the company said.

“We are excited to work with Samsung,” Mosseri said, adding that the new mode makes it easier for users to share every moment in their daily lives and express themselves casually.

The American executive also said South Korea-based esports are some of the top interests that people connect to on the platform globally.

Over 1 million South Korean Instagrammers interacted with esports content by liking, commenting and posting in the last 90 days, the Instagram CEO said.

Mosseri also had attended the League of Legends live competition a day before the press conference during his two-day trip.

The new chief highlighted Instagram’s ongoing effort amid privacy concerns over Facebook’s plan to integrate WhatsApp and Instagram that would make it possible for users to send messages to one another without switching apps.

“We think privacy is a core part,” he said, mentioning that Facebook CEO Mark Zuckerberg issued a manifesto in an apparent attempt to make the social-networking firm a privacy-focused platform.

Mosseri, the former Facebook vice president of News Feed, was named the head of Instagram in October 2018 following the resignation of Instagram’s founders — Kevin Systrom and Mike Krieger.