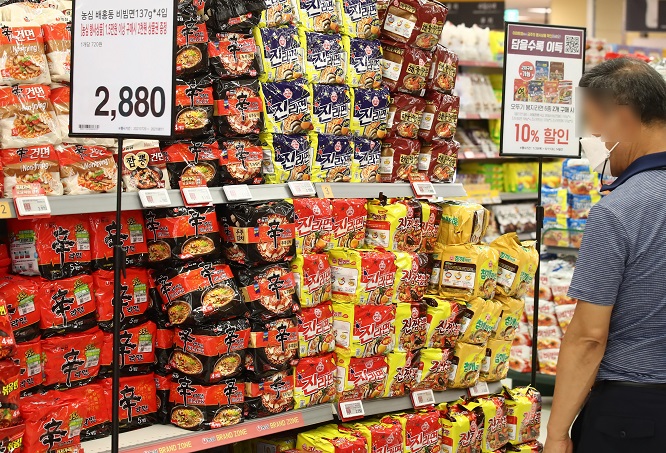 This file photo shows the “ramyeon,” or instant noodles, section of a retail outlet in Seoul on July 29, 2021. Nongshim, the country’s top ramyeon maker, announced earlier in the day it would begin raising the prices of its brands by an average of 6.8 percent on Aug. 16. (Yonhap)

According to the data by Statistics Korea, the price of instant noodles, or “ramyeon” in Korean, surged 11 percent in October from a year earlier. The price hike was the largest since February 2009, when the price grew 14.3 percent on-year.

The steep increase came after South Korea’s major noodles makers, including Nongshim and Samyang Foods, began raising their product prices in August due to increased costs to buy flour and other key materials.

Instant noodles are one of the most frequently eaten foods in South Korea since they are cheap and easy to cook. The government closely monitors their price movements since a hike could apply upward pressure on inflation.

In October, the country’s consumer prices jumped 3.2 percent from a year earlier, the fastest clip in almost a decade. It is much higher than the central bank’s target inflation rate of 2 percent for this year.