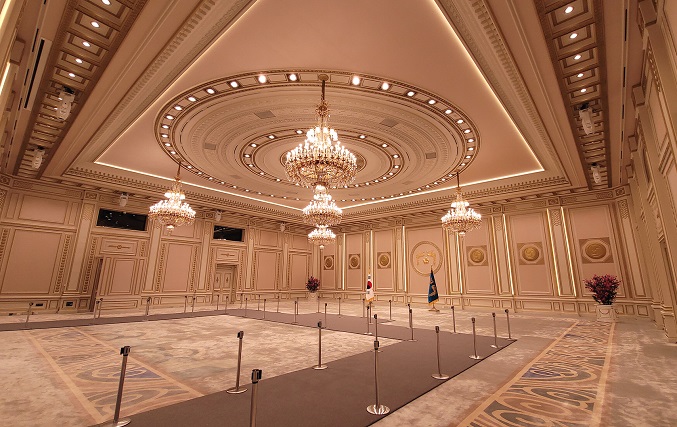 This photo provided by the Cultural Heritage Administration shows the interior of Yeongbingwan, the state reception hall, inside Cheong Wa Dae in central Seoul.

SEOUL, May 23 (Korea Bizwire) — Ordinary citizens visiting Cheong Wa Dae will be allowed to tour the interior of some facilities of the former presidential office in the heart of Seoul from this week, a government agency said Monday.

The Cultural Heritage Administration (CHA) said the interior of Yeongbingwan, the state reception hall, and the Chunchugwan Press Center will be partially open to visitors, beginning Monday.

Visitors can check out the history of Yeongbingwan, which was previously used for dinner for state guests and other diplomatic events, while looking at panels installed in the first floor hall and walking along the designated path, CHA said.

At Chunchugwan, visitors can experience the role of a presidential spokesperson at a photo zone on the first floor before looking around the briefing room, where government policies were announced, on the second floor, it noted. 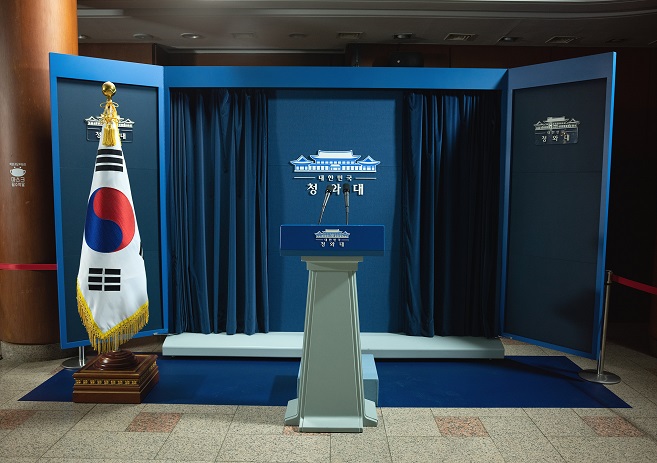 This photo provided by the Cultural Heritage Administration shows a visitors’ photo zone at the Chunchugwan Press Center inside Cheong Wa Dae in central Seoul.

Cheong Wa Dae was open to the public beginning May 10 in line with President Yoon Suk-yeol’s campaign pledge.

More than 5 million people applied to visit Cheong Wa Dae until Sunday, and 377,888 successful applicants toured the vast compound, CHA said. The interior of any of the Cheong Wa Dae facilities was off-limits to visitors.

CHA said it has been entrusted by the presidential office to be in charge of opening and managing Cheong Wa Dae facilities. The agency added it has not yet been decided which Cheong Wa Dae buildings will be additionally open to the public.