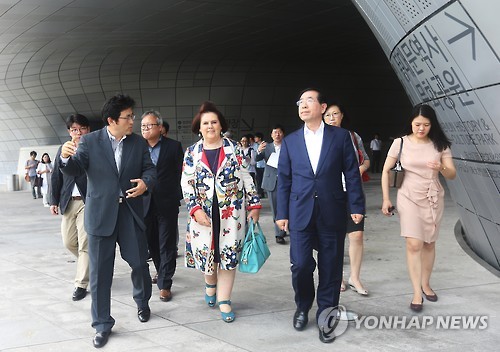 Seoul, July 17 (Korea Bizwire) – Suzy Menkes, the most famous fashion journalist in the world over the past 50 years, has visited Dongdaemun Fashion Town in Seoul.

Menkes, accompanied by Seoul Mayor Park Won-soon, visited Dongdaemun Design Plaza (DDP), Doota, where many young designers are gathered, and the Dongdaemun Composite Market, the biggest fabric market in Korea. They discussed the development of the Seoul fashion industry and ways to support designers.

As Vogue International’s editor, Menkes writes for the Vogue websites of 19 different countries, including England, France, Spain and Russia. She is the executive supervisor of the Conde Nast International Luxury Conference, one of the biggest events representing the global fashion industry. This year’s conference was held in Firenze, Italy, and at the event, Seoul was selected as the host city for the event next year.

Menkes and Mayor Park exchanged opinions on the conference next year, and then headed to the DDP.

Menkes had a positive impression of Korea, noting, “Seoul is a city that represents the future, and is in the center of the luxury industry of Northeast Asia.” She also announced that the theme for next year’s conference would be ‘luxury of the future’.

Afterwards, Menkes and Mayor Park met young designers and listened to their opinions about financial support and establishing new distribution channels. They also thought about ways to nurture new designers of the next generation.

Finally, they visited the Dongdaemun Composite Market, and discussed ways to enhance the competitiveness of Dongdaemun in the deflated economy, as well as developing new ways to activate foreign exports.

Mayor Park stated, “By meeting international fashion tycoon Suzy Menkes, I hope to find ways to establish Seoul as a fashion city and exploit the potential of Dongdaemun as a tourist attraction”.