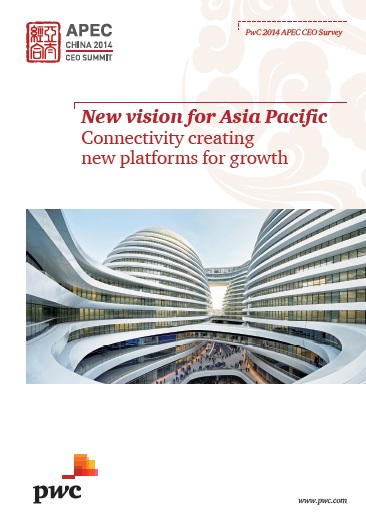 BEIJING, Nov. 8 (Korea Bizwire) – Confidence among CEOs in Asia Pacific continues to get stronger, a new report by PwC finds. Forty-six percent of executives in the region now say they are “very confident” of growth in the next 12 months, up 10 points from 2012 and four points from last year, despite slowing growth in China, the economic engine for the region.

PwC’s study, “New Vision for Asia Pacific: Connectivity creating new platforms for growth,” surveyed more than 600 business leaders about prospects for business in the region. It was released today at a meeting of the Asia Pacific Economic Cooperation (APEC) in Beijing.

The survey found that 67% of executives plan to increase investment in the APEC region over the next 12 months. Their plans are spread over each of the 21 APEC member economies, with China, the US, Indonesia, Hong Kong-China and Singapore the most popular destinations for investment.

Capital spending is a part of it; 57% of respondents said they are either building or expanding facilities in APEC economies in the next 3 to 5 years. Most also plan to hire: 38% of respondents expect headcount in their organisations globally to expand by at least 5% a year over the next 3-5 years.

Supporting this confidence is a vision of an Asia Pacific region that is more connected, both physically and virtually, and an outlook for more balanced regional growth. For example, nearly 60% of executives say they are now more willing to share insights and resources with business partners in order to speed product development and gain market access. And more than 40% say their company will likely enter a business combination outside of their core industry.

“Asia Pacific today stands at a turning point as advancing technologies move beyond national boundaries and create new demands and even new industries,” says Dennis M. Nally, Chairman of PricewaterhouseCoopers International Ltd. “CEOs see the need to be bold in breaking down the barriers to growth. They want to finalise the Trans-Pacific Partnership, address intellectual property issues and encourage regulatory harmony in the region.”

The survey found that data-driven changes are having an impact in the region; 57% of executives say they are more confident of their ability to respond to changes in the marketplace, and half say they are more skilful at forecasting demand. These executives are more likely to be “very confident” of growth (67%) than their peers.

*T
— Domestic competition is intensifying, while compliance and tax
uncertainties continue. Twenty percent of respondents say they are less
confident in their ability to increase profit margins on their domestic
operations than they were a year ago. And 15% say their confidence in
forecasting compliance and tax liabilities declined over the year.
— More executives with operations in China are “very confident” of growth
in the Chinese market (42%), than are confident of growth internationally
for products made in China (32%).
— A healthy, skilled workforce remains a priority; 75% of respondents
already have employee training/retraining programmes and 17% say they
will implement one.
— Many APEC businesses are not ready to fully participate in the digital
economy. Less than half (46%) of Asia Pacific executives are confident
they are profiting from their investments in social networks. And between
12% and 22% of APEC businesses are “very confident” across a range of
social network capabilities.
— Momentum for free trade continues, but progress is slow. Seventy percent
of respondents say APEC is moving closer to a Free Trade Area of the Asia
Pacific (FTAAP), but more than half (55%) say progress is lagging, and
11% say it has stalled or even reversed.

“Businesses are investing in a different Asia Pacific with rising numbers of urban middle-income consumers demanding new, technologically advanced products and services from business and governments,” says Mr. Nally. “In its 25th year, APEC has an ongoing and important role to play in helping to meet these demands and advancing growth throughout the region.”

*T
— About APEC
The Asia-Pacific Economic Cooperation (APEC) forum is the premier
economic organisation in the Asia-Pacific region. Established in 1989 by
12 economies, APEC fosters growth and prosperity by facilitating economic
cooperation and expanding trade and investment throughout the region.
APEC’s 21 member economies today account for 55% of global GDP.
The APEC CEO Summit is the Asia-Pacific’s premier business event, drawing
thousands of economic and business leaders from around the region and
beyond. The 2014 CEO Summit will be held from 8 November to 10 November
in Beijing, China.
— Survey Methodology
Carried out by PwC International Survey Unit, the APEC CEO Survey 2014
was conducted between June and August 2014 covering 635 CEOs and industry
leaders across 39 nations with operations in APEC economies. The full
survey report can be found here www.pwc.com/us/apec/2014.

PwC firms help organisations and individuals create the value they’re looking for. We’re a network of firms in 157 countries with more than 195,000 people who are committed to delivering quality in assurance, tax and advisory services. Find out more and tell us what matters to you by visiting us at www.pwc.com.

The PwC logo is available at http://www.globenewswire.com/newsroom/prs/?pkgid=2684