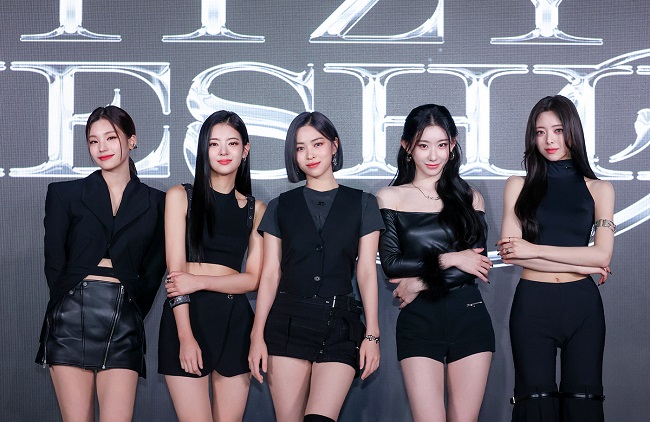 K-pop girl group ITZY poses for the camera during a media showcase in Seoul on Nov. 25, 2022, for its upcoming EP “Cheshire,” in this photo provided by JYP Entertainment.

SEOUL, Nov. 25 (Korea Bizwire) — K-pop girl group ITZY said Friday it has given a new spin to its consistent message on an independent and carefree life in its upcoming EP, “Cheshire.”

“We worked hard on this album in the middle of a world tour,” member Chaeryeong said during a press event to promote the album in Seoul. “I think we’ll be able to show you our own independent and confident charms through this album.”

Since its debut in 2019, the quintet has consistently advocated girls in the young generation who pursue youthful, fun, independent and carefree lives in its hit songs, such as “Dalla Dalla,” “Icy,” “Wannabe,” “Not Shy,” “Mafia In the Morning” and “Loco.”

Most recently, the group released its fifth EP, “Checkmate,” which reached eighth on the Billboard 200 songs chart upon its release in July. The EP became the band’s first million seller, based on data from the country’s benchmark Circle Chart.

In “Cheshire,” the title track off its sixth EP set to drop at 6 p.m. Wednesday, the band sings that you should follow your heart, not your mind, because there is no correct answer to numerous questions and choices you face in your life.

“We have clung to the message that you just have to believe in yourself and go out to try things, which we have always pursued, but delivered it in a new way through the image of Cheshire,” Yeji said.

The album and the main track were named after the Cheshire cat, a fictional cat popularized by Lewis Carroll in his classic children’s story “Alice’s Adventures in Wonderland” and known for its distinctive mischievous grin, according to the band.

The group used the cat’s enigmatic and mischievous grin to create the song’s dreamlike vibe and unique choreography.

Yuna said she was greatly influenced by the group’s songs about independent and confident girls as a person.

“I came to believe in myself and my bandmates as I tried to do music in a more honest way. So I have always hoped such a positive energy can reach those who see us.”

In addition to the title track, the new EP has three more songs — “Snowy,” “Freaky” and “Boys Like You,” an English-language single unveiled on Oct. 21 before the album’s release.

ITZY has just returned from the United States where it had part of its first-ever world tour since its debut.

After the U.S. shows, the tour is scheduled to take the group to five Asian countries — Singapore, Indonesia, Japan, Thailand and the Philippines — in the first half of next year.

“We have completed the U.S. concerts without any problem,” Yeji said. “We went there to spread good energy but received far more good energy from our American fans.”

The group will give the first live performance of “Cheshire” at the 2022 MAMA Awards to be held on Nov. 29-30 at Kyocera Dome Osaka, Japan.