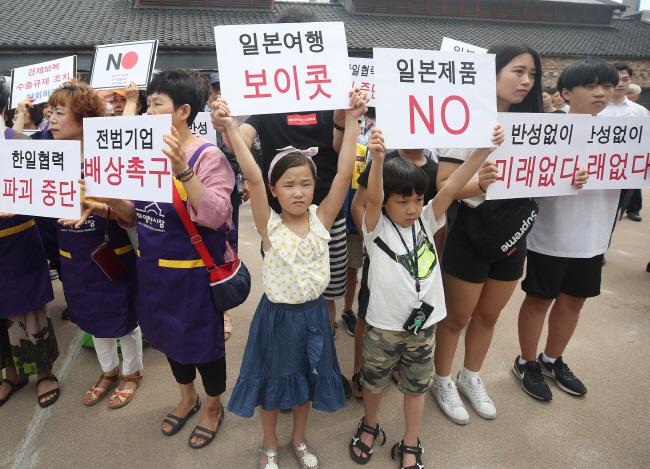 A group of South Koreans stage a rally on July 30, 2019, urging people to boycott Japanese products, as well as trips to Japan, for Japan’s export restrictions on key materials for semiconductors and display panels that are expected to undermine South Korea’s exports. (Yonhap)

SEOUL, Aug. 2 (Korea Bizwire) — Despite what Japan cites as reasons for its curbs on exports to South Korea, the country may have hidden motives that include an attempt to evade responsibility for its past wrongdoings, officials here say.

On July 4, Tokyo implemented tougher restrictions on South Korea-bound shipments of three materials — resist, etching gas and fluorinated polyimide — that are essential in the production of semiconductors and display panels.

The only reason Tokyo has offered so far for its export restrictions is security and what it has called “inappropriate” use of the materials shipped to South Korea.

While striking South Korea off its whitelist of countries given special treatment in purchasing dual-use products, or products that can be used to produce weapons, Japan again cited security issues, noting the possibility of shipments to South Korea ending up in North Korea.

Seoul has repeated calls for talks to resolve the issue. But Tokyo has snubbed such calls while failing to provide any specific reasons for its export restrictions or evidence to support them.

Many here believe the restrictions are not motivated by economic or trade concerns on the South Korean part, but instead are a complicated ploy to enhance Japan’s economic prowess.

“It is simply nonsense for a country that enjoys a large trade surplus to take punitive measures against a major trading partner,” said Sohn Seung-pyo, a professor of international trade at Seoul’s Dongguk University.

The professor said the only such case in history may be the so-called Coercive Acts taken by Britain in 1774 in the wake of the Boston Tea Party incident when Britain took a series of punitive measures against the American colonies despite its large trade surplus.

“The export restrictions are not about free trade violations nor are they about strategic materials. And Japan is apparently unable to hold bilateral meetings (with South Korea) because it has no justification for its steps,” Sohn said.

Sohn suggested the Japanese move may be aimed at what he called “Korea bashing.”

“Its goal may be to boost the global market share of Japanese semiconductor manufacturers because memory chips will be one of products that will benefit the most under the fourth industrial revolution,” he said.

Others believe Japan’s ulterior motive may be political.

Japan has repeatedly and explicitly asked Seoul to scrap two 2018 Supreme Court rulings that ordered Mitsubishi Heavy Industries to pay up to 120 million won (US$101,000) each in compensation to 12 South Korean victims forced into unpaid labor for the Japanese firm during Japan’s 1910-45 colonial rule of Korea.

Lee Jae-cheol, an official from the state-run support group for victims of forced labor under the Japanese colonial rule, noted Tokyo may fear the possibility of tens of thousands of damage suits that may follow. 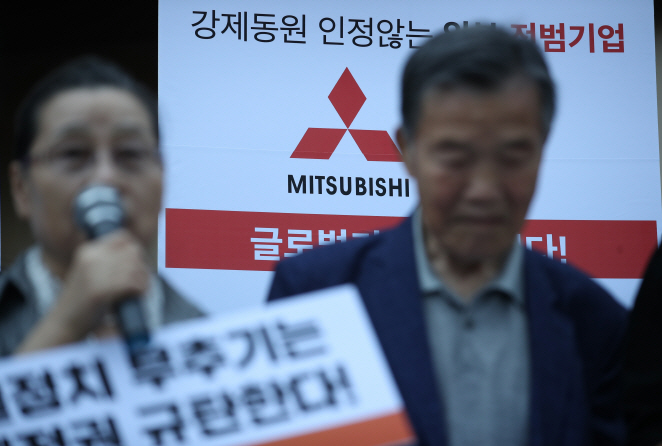 A group of South Korean civic activists stages a protest rally in Seoul on July 5, 2019, to urge Japan’s Mitsubishi Heavy Industries to pay compensation to South Korean victims of forced labor in the early 20th century as ordered by a Supreme Court ruling. (Yonhap)

Already, about a dozen other cases are sitting at the South Korean Supreme Court, according to earlier reports.

“After the Supreme Court decision, there has been an increase in the number of bereaved families (of victims) filing damage suits. About 1,000 people have filed suits, while those who were mobilized by the Japanese government, not Japanese companies, to serve in the military, are also moving to file damage suits,” Lee said.

The National Archives of Korea has a list of more than 480,000 Koreans forced into unpaid labor or sexual slavery during Japan’s colonial rule of Korea.

The list is based on documents, such as company payrolls and mobilization reports, provided by Japan.

In a 2012 report, South Korea’s prime minister’s office identified 1,439 Japanese companies that committed wartime atrocities against Koreans by forcing them into unpaid labor, 299 of which still existed and were in business as of that year.

“The Supreme Court rulings could set a precedent in damage suits that may follow in the future,” a government official here said while asking not to be identified due to the sensitivity of the issue.

The assistant trade minister insisted they will also cause “immeasurable damage” to global consumers by pushing up the prices of South Korea’s two key export items, as well as all other electronic products that use them as parts.

South Korea produces about 72 percent of the global supply of DRAM semiconductors and 95 percent of OLED display panels, according to Kim.

Seoul says as much as it would like to mend its ties with Tokyo, scrapping court decisions is not possible.

“Our Supreme Court decided that the 1965 South Korea-Japan settlement agreement does not include (settlement) of inhumane crimes or human rights violations against forced laborers, and as a democratic nation, South Korea may neither ignore nor annul such a court decision,” Kim Hyun-chong, a deputy chief of the National Security Office at Seoul’s presidential office Cheong Wa Dae, said earlier.