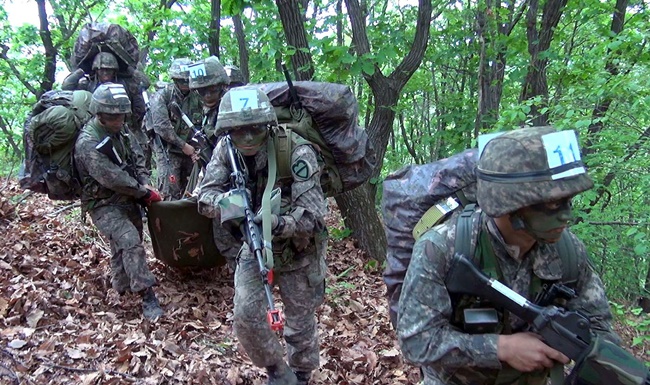 The competition has been presented by the division in order to set an example by showing executive officers undergoing hardship. (image: ROK Army)

SEOUL, Jul. 6 (Korea Bizwire) — Korea’s 30th Mechanized Infantry Division has recently introduced a competition called ‘Best Warrior,’ in which 4 ‘Best Warriors’ are selected through an ‘infernal’ three day competition with no sleep, among 70 executive army officers in the division.

The competition has been presented by the division in order to set an example by showing executive officers undergoing hardship.

The first Best Warrior competition was held in May, and 16 out of 70 executive officers who participated dropped out. It is already being called ‘Hell’ by the division’s soldiers.

The competition is comprised of tests for different combat performances, and the participating soldiers are deprived of food and sleep except for small amounts of rice balls and water.

Woo Hyeon-Gu, the first class sergeant who won the title in the first competition, said that although he had often thought about quitting the competition, he just kept telling himself that he could do anything he wanted to.

He said that the winning was an experience of implanting courage and pride in his heart.