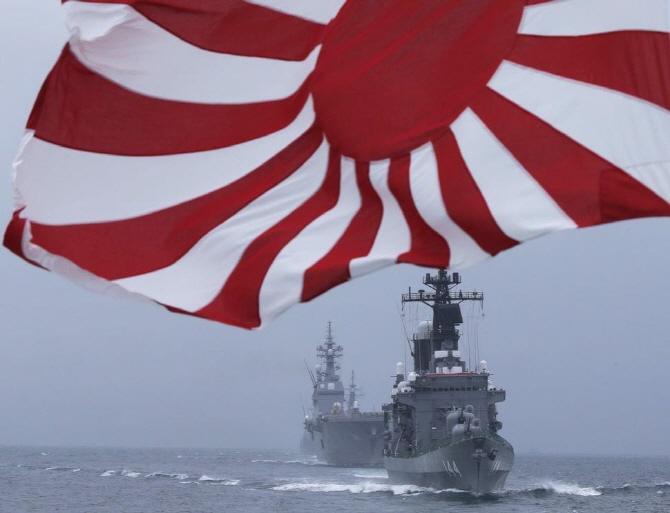 SEOUL, Sept. 6 (Korea Bizwire) — A Japanese warship carrying a controversial flag symbolic of its past imperialism are expected to join an international fleet review slated to take place on South Korea’s southern island of Jeju next month, a military source in Seoul said Thursday.

The display of Japan’s Rising Sun flag is likely to inflame the public sentiment in South Korea, where historical animosity over the wrongdoings of the country’s onetime colonizer, still runs deep. Japan colonized the peninsula from 1910-45.

South Korea’s Navy will host the fleet review from Oct. 10-14 around the resort island. About 20 foreign warships, including those from the United States, China and Japan, will participate in the first such event in Korea since 2008.

“In the Jeju event, a warship from the Japan Maritime Self-Defense Force hoisting the Rising Sun flag, will participate,” the source said on condition of anonymity. “In the past fleet review, Japanese ships also carried the flag. … (A host nation) cannot ban them from carrying the flag.”

With Tokyo refusing to fully atone for its colonial-era misdeeds, such as its wartime sexual slavery, South Koreans have continued to harbor uneasy feelings toward their neighbor despite the need for security cooperation in the face of North Korean threats.

In the fleet review, the U.S. Navy will deploy four warships, including the aircraft carrier USS Ronald Reagan, a source in Seoul said. The U.S. ships, however, will not stage any combined exercise with South Korea, he added.

Russia will send three warships, while India and Thailand are set to deploy one and two, respectively. About 10,000 foreign navy personnel are expected to attend the event.

During the review, a series of forums on maritime security and weapons systems will also take place.

The naval event is designed to promote harmony and world peace with the participation of naval vessels from many countries. South Korea first held the international event in 1998 to mark the 50th anniversary of its military. It has since held the event every decade.