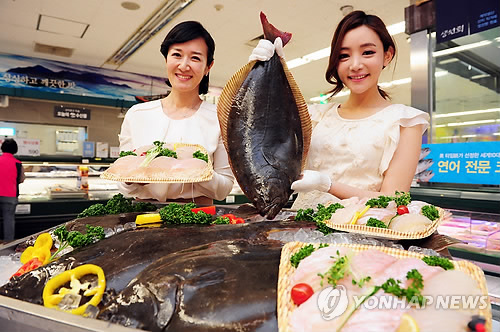 Due to such restrictions, the amount of Korean flatfish exported to Japan in the first half of this year fell to 1,018 tons, a drop of 14 percent compared to the same period last year. (image: Yonhap)

SEOUL, July 15 (Korea Bizwire) – Japan has imposed a de facto import ban on Korean flatfish, after the detection of Kudoa parasites at some flatfish farms in Korea.

According to the Ministry of Oceans and Fisheries of Korea, the Ministry of Health, Labor and Welfare and Fisheries Agency of Japan designated 28 flatfish farms in Korea as targets of an “inspection order.” Since the order was imposed, the targeted farms must now pass an investigation process to export products to Japan.

As the products from the designated farms must wait for the investigation results to clear customs, it is virtually impossible to export fresh food products like the flatfish to Japan. Currently there are approximately 700 flatfish farms in Korea, and among them, some 400 are registered as export farms to Japan.

Due to such restrictions, the amount of Korean flatfish exported to Japan in the first half of this year fell to 1,018 tons, a drop of 14 percent compared to the same period last year.

Japan imposed the inspection order to the farms by arguing that the Kudoa parasite could cause food poisoning. However, the Korean government protested the Japanese government’s move, saying that it was scientifically baseless, as the parasite is not registered as a food-poisoning parasite by international institutes.

Market experts believe the strong position held by the Japanese government is a response to Korea’s move to ban imports of fisheries products from eight prefectures near Fukushima from September 2013 due to the worry over radiation contamination.

A Korean official at a Japanese firm importing Korean fisheries products said, “Korean flatfish farms are controlled under strict rules such, and the Japanese government is imposing excessive restrictions on them.”