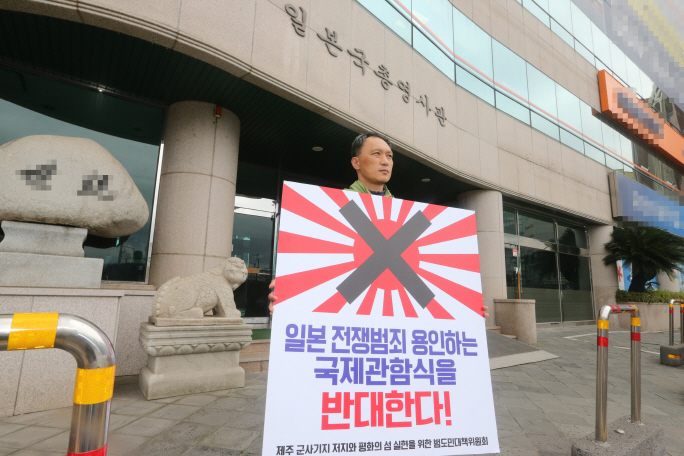 A South Korean activist protests against Japan’s plan to send a warship flying the Rising Sun flag to a naval event on Jeju Island in front of Japan’s consular office on the island on Oct. 4, 2018. (image: Yonhap)

SEOUL, Oct. 5 (Korea Bizwire) — Japan has decided to skip an international naval event in South Korea next week amid a dispute over its plan to fly the Rising Sun flag, a Seoul government source said Friday.

Japan informed South Korea of the decision to not send a warship to the International Fleet Review to open for a five-day run at a military port on Jeju Island on Wednesday.

Japan had planned to send a warship to the event, saying it would fly the flag during the ceremony.

South Korea strongly opposed this, citing public sentiment here. South Koreans regard the flag as a symbol of Japan’s imperialistic past. Korea was under Japan’s brutal colonial rule from 1910-45.

Japan’s military instead plans to dispatch a delegation to a symposium to be held as part of the event, the source added.

Thirteen foreign countries will participate in the fleet review.

South Korea has asked that participating ships hoist their own national flags and the South Korean one, the Taegeukki.