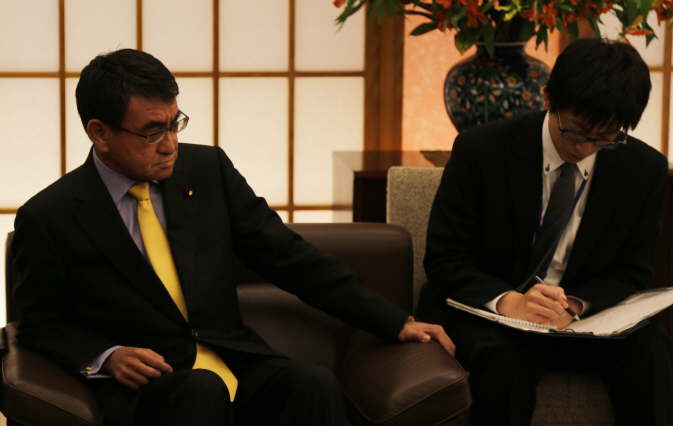 SEOUL, Oct. 30 (Korea Bizwire) — Taro Kono, Japan’s Minister of Foreign Affairs, said that he was “not at all thinking about a losing ruling” regarding a court decision to be made today on whether a Japanese steel firm must compensate Korean victims forced to work in its factories.

In an interview with Sankei Shimbun, the Japanese minister said that the matter regarding the compensation had already been concluded.

When asked about the Japanese government’s response to the ruling, the minister said that he hoped Korea would be forward thinking when it comes to the ruling.

The Japanese press have been speculating on how the ruling would affect Korea-Japan relations going forward.

The Supreme Court is expected to announce its decision on a lower court’s ruling that ordered Nippon Steel & Sumitomo Metal Corp. to pay 100 million won each in compensation to four victims. Only one victim survives today.

Yesterday, Tokyo Shimbun published an article with the headline that suggested that South Korea-Japan relations would be negatively affected if the court ruling upheld the lower court’s ruling for compensation.

“The Japanese government states that the matters surrounding compensation have been resolved following the 1965 Korea-Japan Normalization Treaty,” said the newspaper article, which predicted that there was a high chance that the ruling would be issued in favor of the plaintiff, “a big blow to Korea-Japan relations.”

The Mainichi Shimbun also issued a similar report from Seoul regarding the expected court ruling.