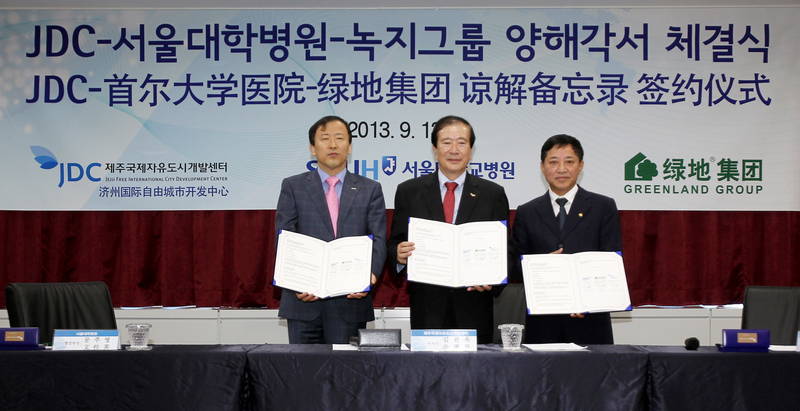 Under the agreement, the hospital and Greenland Group will develop medical facilities, including a medical check-up center and a special clinic, as part of the group’s second phase project. JDC is confident that this MOU will accelerate the establishment of medical facilities at Jeju Healthcare Town.

Seoul National University Hospital, one of the nation’s leading general hospitals, which conducts world-class education, research and treatment, has paid constant attention to Jeju and Jeju Healthcare Town since it signed an MOU with JDC and Jeju Special Self-Governing Province in 2008. Greenland Group, one of the global 500 companies, selected Jeju Healthcare Town as its first overseas project to achieve another round of growth, while aggressively pursuing this three-party agreement based on the belief that cooperation with SNU Hospital is critical to the success of its Jeju project.

JDC (http://english.jdcenter.com/main/index.do) is making full efforts to ensure that the establishment of medical facilities, including a medical check-up center, a special clinic and medical street, goes smoothly.

The Jeju Healthcare Town project, conducted by JDC, a state-owned company established under the Ministry of Land, Infrastructure and Transport, was launched to build a global resort and medical service complex and create a new growth engine for the economy by combining Korea’s top-quality medical services with Jeju’s natural beauty. Regarding its impact on the island, the town is expected to create KRW1.8 trillion in production output, KRW440 billion in income and more than 20,000 new jobs.

JDC Chairman Kim Han-wook said in his remarks at the MOU signing ceremony, “Greenland Group and Seoul National University Hospital present a leading success model for healthcare towns. This agreement moves us a step closer toward fulfilling the promise of Jeju Healthcare Town.”