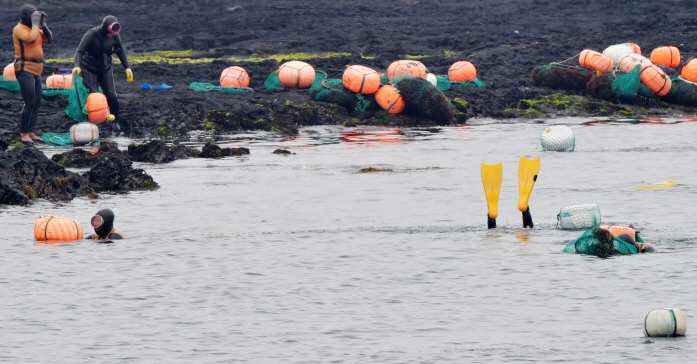 Haenyeo over 70 years of age account for as much as 59 percent of all 3,898 female divers on the island. (Yonhap)

JEJU, Jun. 26 (Korea Bizwire) — Starting next month, Jeju Province will be offering 300,000 won (US$258) in pension disbursements each month to haenyeo – traditional female divers from the island – who are more than 80 years old as part of a program that is scheduled to run over the next three years.

The decision comes as part of provincial government’s welfare policy to ensure a stable living environment for haenyeo and prevent them from engaging in excessive diving activities for income.

Jeju passed a bill to protect haenyeo activities in May, which served as a legal basis for the recent measure.

Haenyeo over 70 years of age account for as much as 59 percent of all 3,898 female divers on the island. Seniors over age 80 make up roughly 17 percent of the total haenyeo population.

Prior to the decision, Jeju officials conducted a survey of 598 haenyeo and fishermen in March and asked them what they thought about retirement pensions, most of whom responded that a three-year pension plan would be most ideal.

Among haenyeo, 86 percent said that they would refrain from diving activities if a retirement pension was provided.