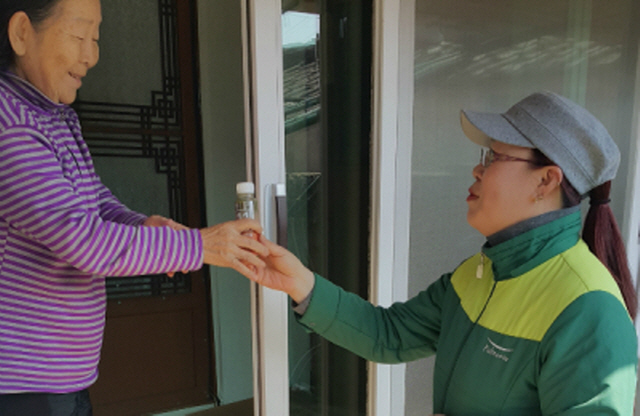 The purpose of the project is to periodically check households at risk of lonely death and respond quickly if there are any signs of abnormalities, and to identify and support their difficulties. (image: Jeungpyeong County)

JEUNGPYEONG, Apr. 3 (Korea Bizwire) — The county government of Jeungpyeong, North Chungcheong Province, announced on Tuesday that it will expand and implement a “Green Greeting” project that delivers green vegetable juice to prevent the solitude of underprivileged people such as single-parent families with young children and elderly people living alone.

The project will be operated by green vegetable juice salespeople who deliver the juice twice a week to 50 underprivileged households who are at a high risk of lonely death, such as a single elderly people, single-parent families with infants and a two-person household for which members have severe disabilities.

Last year, the project was temporarily operated for three months to 40 households with support from the Community Chest of Korea, but this year the county prepared its own budget and increased the number of recipients.

The purpose of the project is to periodically check households at risk of lonely death and respond quickly if there are any signs of abnormalities, and to identify and support their difficulties.

The county office promised to strengthen the social safety net to protect the underprivileged so that no one dies alone, isolated and abandoned.

In April of last year, a woman in her 40s who had been suffering from high debt pressure, was found in her apartment along with her four-year-old daughter three months after she died.

The woman made an extreme choice after her husband died in September 2017 after she had been struggling to raise her daughter alone, but no one knew this.

After the incident, there were mounting calls for strengthening the social safety net.