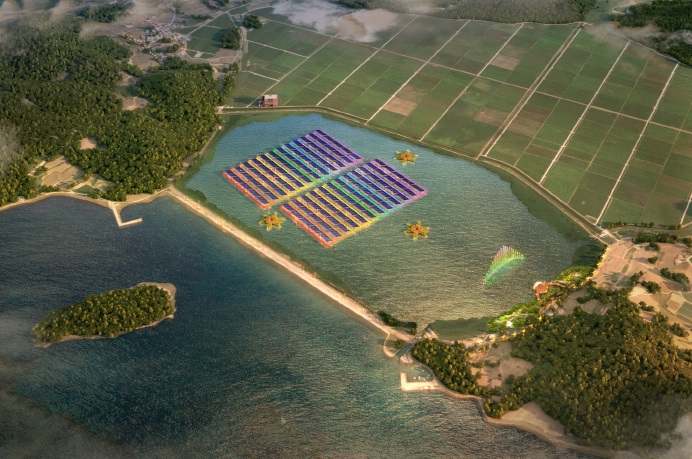 The floating solar facilities are expected to have power generating capacities of 40 MW, which is enough energy to power 15,000 households for one hour. (image: Yonhap)

JINDO, Oct. 25 (Korea Bizwire) — A move to push for a large-scale solar energy project initiated by community citizens for the first time in South Korea is gaining attention.

The energy project to be set up on Jindo, an island in South Jeolla Province, will be led by cooperative members and is expected to be more than just a “participatory” effort by the local people.

According to the New and Renewable Energy Cooperative of Jindo, a floating solar (or floating photovoltaic (FPV)) project will be pushed forward.

Floating solar refers to an arrangement of solar panels on a structure that floats on a body of water.

The floating solar facilities are expected to have power generating capacities of 40 MW, which is enough energy to power 15,000 households for one hour. The project is expected to cost 93 billion won.

The cooperative is composed of residents of the villages of Galduri and Geojeri in Jisan-myeon, and 98 households out of a total 108 households from the two villages have joined the cooperative, boasting a membership rate of 90.7 percent.

It is very rare to find a cooperative that initiates a project, let alone one with residents taking a 40 percent stake in the project.

According to the cooperative, if the project is a success, 500 million won will be distributed to the residents as shared profits for 20 years.

The total amount translates to 9.6 billion won for the local community.

The cooperative also expects that the project will create 100 million won worth of jobs every year. In 20 years, that means 2.4 billion won for the local residents.

The municipality of Jindo-gun will also profit handsomely from the venture by raking in 1.7 billion won in taxes each year.

During the course of 20 years, the local government will be able to collect 14.4 billion won in taxes.

As the construction period of the solar project is expected to be two years, this would also create new jobs for 40 to 80 people. Upon completion, the facility will need to employ at least 10 workers during its operation.