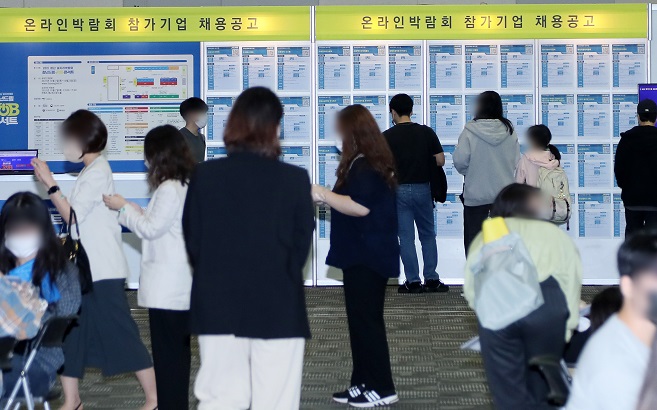 Young jobseekers look at employment information at a job fair in Goyang, north of Seoul, on Oct. 7, 2021. (Yonhap)

SEOUL, Oct. 13 (Korea Bizwire) — South Korea reported the largest job growth in more than seven years in September in the latest sign that the country’s job recovery has continued despite the fourth wave of the pandemic, data showed Wednesday.

The number of employed people reached 27.68 million last month, 671,000 more than a year earlier, according to the data compiled by Statistics Korea.

It marked the largest job additions since March 2014, when the number of employed people grew 726,000. It also was the seventh straight month of job growth.

Job recovery has continued as the South Korean economy is on a recovery track on the back of robust exports, according to the statistics agency.

Finance Minister Hong Nam-ki said job recovery momentum has become “evident,” saying that employment in the private sector has markedly improved despite the fourth wave of the pandemic.

The pace of job additions slowed for the fourth straight month in August, but it picked up last month even as the country is grappling with the resurgence in COVID-19 cases. South Korea’s daily virus infections exceeded 1,000 for more than three months.

Since July 12, the greater Seoul area, home to half of the country’s population of 52 million, has been under the Level 4 social distancing rules, which includes restrictions on business operations and private gatherings.

The country’s jobless rate fell 0.9 percentage point on-year to 2.7 percent last month, the lowest in eight years for any September.

The unemployment rate for young adults — those aged between 15 and 29 — declined 3.5 percentage points on-year to 5.4 percent.

The number of non-economically active people, those who have no willingness to work, declined for the seventh straight month. The number of such people fell 132,000 on-year to 16.7 million last month. 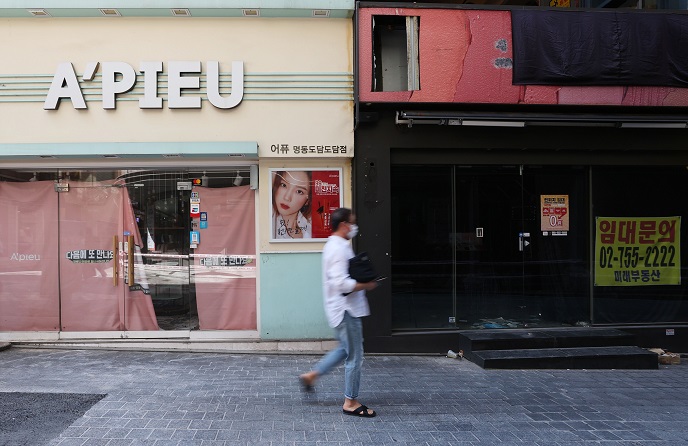 This file photo, taken Sept. 15, 2021, shows closed stores in the shopping district of Myeongdong in downtown Seoul amid the COVID-19 pandemic. (Yonhap)

The data showed employment in in-person service segments still remained fragile as they were hit hard by the flare-up in virus cases.

The wholesale and retail sector reported a fall of 122,000 jobs, compared with a decline of 113,000 the previous month. The arts, sports and leisure segment saw jobs decline 34,000 on-year.

But the accommodation and food service sector reported job growth after the second straight month of decline, with an on-year gain of 39,000. The education service sector added 98,000 jobs from a year earlier.

“The number of employed people in the lodging and restaurant sectors appeared to rebound, helped by the easing of some restrictions on private gatherings, emergency cash handouts and the vaccine rollout,” Jeong Dong-myeong, a senior official at Statistics Korea, told reporters.

Under Level 4 measures, private gatherings of three or more people are banned after 6 p.m. But gatherings of up to six people are currently allowed when at least four of them are fully vaccinated.

The government began to provide emergency relief funds last month to people in the bottom 88 percent income bracket to help them cope with the fallout of the pandemic.

The manufacturing sector, a backbone of the country’s economy, reported an on-year fall of 37,000 jobs last month.

The finance ministry raised its 2021 growth outlook for the Korean economy to 4.2 percent from its earlier estimate of 3.2 percent.

The Bank of Korea (BOK) forecast economic growth of 4 percent, while the International Monetary Fund kept its 2021 economic growth estimate for South Korea unchanged at 4.3 percent.