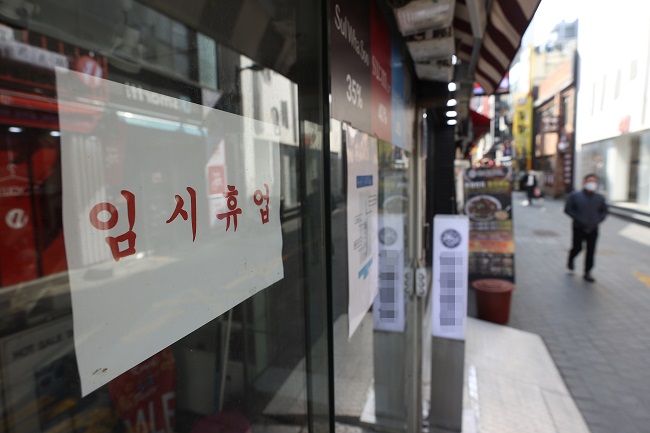 This file photo, taken on March 3, 2021, shows a sign announcing a temporary business closure over the pandemic that was put up at a store in Seoul’s shopping district of Myeongdong. (Yonhap)

SEOUL, March 17 (Korea Bizwire) — In a sign of a mild improvement in the job market hit hard by the pandemic, South Korea’s job losses eased last month compared to the previous month, but it would take longer than expected time for employment in Asia’s fourth-largest economy to show a meaningful recovery.

The number of employed people reached 26.3 million in February, 473,000 fewer than a year earlier, according to data from Statistics Korea.

It marked the 12th straight month of job losses, the longest streak since the 1997-98 Asian financial crisis. But February’s job reduction was lower than the 982,000 recorded in January, the worst since December 1998.

South Korea has reported job losses every month since March last year, when the nation lost about 195,000 jobs, the first on-year job loss since 2009.

Policymakers voiced optimism that the job market is poised to improve in March, but the recovery, if any, would be slow, given deep slumps in the service sector stung by the COVID-19 pandemic.

On Feb. 15, the country lowered its tougher social distancing measures by one notch to Level 2, the third highest in its five-tier scheme, in the greater Seoul area and to Level 1.5 in other regions.

“Job data is expected to improve next month, helped by the COVID-19 vaccine rollout, relaxed virus curbs, robust exports and the base effect from job slumps in March last year,” Finance Minister Hong Nam-ki said in a Facebook post. 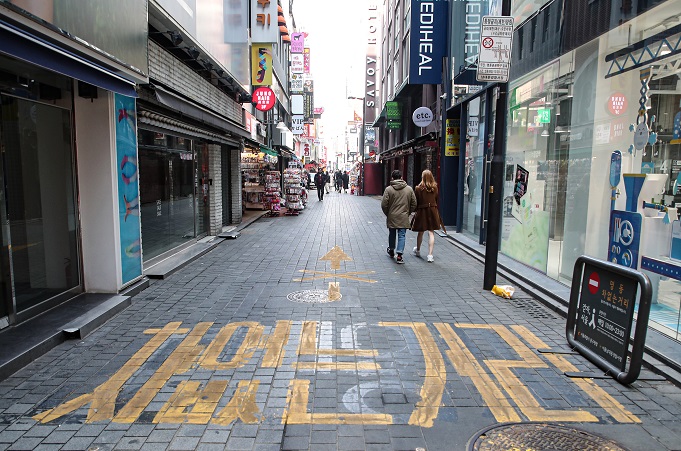 This file photo, taken Feb. 13, 2021, shows an almost empty street of Seoul’s shopping district of Myeongdong amid the pandemic. (Yonhap)

But a set of job data pointed to a protracted slump down the road.

The employment rate for people aged 15 and older came to 58.6 percent in February, down 1.4 percentage points from a year earlier, marking the lowest for any February since 2013.

The number of people who took a rest without seeking jobs reached 2.57 million last month, the largest for any February since 2003.

The number of employed people declined for all age groups, except for people in their 60s and older. Employment in the age group increased due largely to state-backed programs for the elderly.

“The job market appeared to hit bottom in January, but it would be hard to expect a meaningful recovery in the job market until employment situations in the service segment improve,” said Woo Hye-young, an economist at eBest Investment & Securities Co.

Kim Ye-in, an analyst at Korea Investment Corp., said the job market may be able to return to the pre-pandemic level in the third quarter of next year, as employment tends to lag behind an economic recovery. 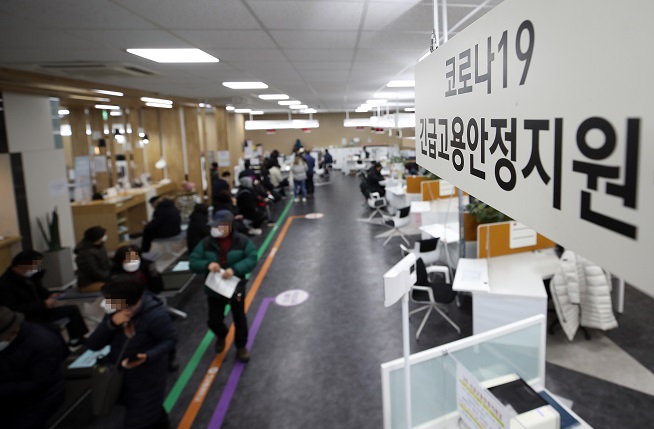 This photo, taken on Jan. 11, 2021, shows people waiting to apply for emergency employment stabilization funds and unemployment benefits at the employment center of the labor ministry in Seoul as the COVID-19 pandemic hit the job market. (Yonhap)

The face-to-face service sectors, such as hospitality and small retailers, bore the brunt of the coronavirus outbreak, as people refrained from visiting shops due to concerns about infection risks.

The accommodation and food service segment reported an on-year fall of 232,000 jobs last month, and the wholesale and retail sector lost 194,000 posts.

This compared with a fall of 27,000 jobs in the manufacturing sector, the backbone of the country’s economy.

The South Korean economy is on a recovery track on the back of robust exports. But private consumption and the job market remain sluggish, with economic recovery being uneven across sectors.

The government earlier said the number of employed people is expected to grow 150,000 this year, a turnaround from last year’s job losses of 220,000.

But the Bank of Korea (BOK) revised down its 2021 employment outlook last month, citing slumps in the service sector.

The country’s central bank forecast the number of hired people to grow 80,000 this year, down from its estimate in November of an increase of 130,000.

“The number of employed people in the face-to-face service sector will likely suffer big falls for the time being. But after the second half, it may gradually increase, helped by the expected flattening of the virus curve and the government’s job policy,” the BOK said.