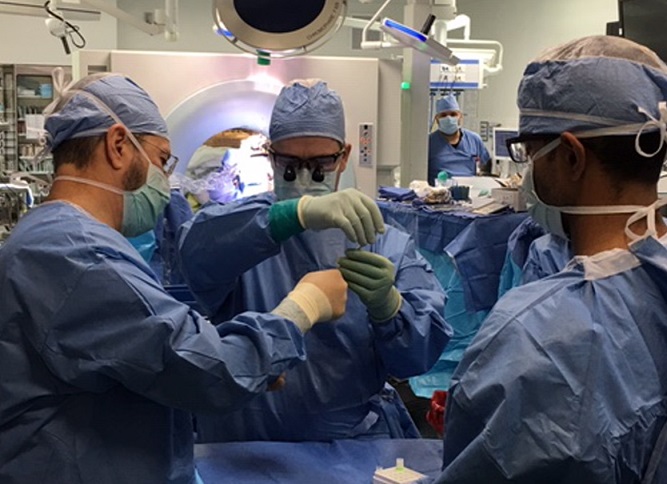 The research team had succeeded in a clinical treatment of transplanting stem cells extracted from the patient’s skin into the brain. (image: KAIST)

SEOUL, June 3 (Korea Bizwire) — A Korean scientist has succeeded in curing Parkinson’s disease using a patient’s own stem cells for the first time in history.

Prof. Kim Kwang-soo of McLean Hospital, Harvard Medical School and his research team announced Tuesday that they had succeeded in a clinical treatment of transplanting stem cells extracted from the patient’s skin into the brain.

Parkinson’s disease is a degenerative disorder of the central nervous system caused by the death of cells in charge of generating enough dopamine. The symptoms involve shaking, rigidity, slowness of movement, and difficulty with walking.

Prof. Kim, a graduate of the Korea Advanced Institute of Science and Technology (KAIST), used an induced pluripotent stem cell (iPSC) to turn the patient’s skin cells into those that produce dopamine to cure Parkinson’s disease without any negative immune response.

Unlike embryonic stem cells, iPS cells, capable of reverting adult cells into primitive form, are made using adult cells, which poses no risk of ethical issues or negative immune response.

George Lopez, a former doctor who received the treatment, has regained enough motor capabilities to tie his shoes, swim and ride a bicycle.

For the first time in history, iPS cells were used to successfully treat a brain disease, the research team explained.

The treatment is known to be a particularly difficult process since it also needs to avoid any side-effects or harm.

In 2011, the research team developed the world’s first iPS cell generation technology and succeeded in an animal test. In 2017, the dopamine neural cell was transplanted into Dr. Lopez’s brain.

Since then, a series of positron emission tomography (PET) and magnetic resonance imaging (MRI) scans showed that the clinical test turned out to be successful.

“We need to conduct more clinical tests on more patients for approved safety and effectiveness,” said Prof. Kim. “We will strive to make stem cell treatment the approved method in treating Parkinson’s disease.”

The research was published in last month’s edition of New England Journal of Medicine.