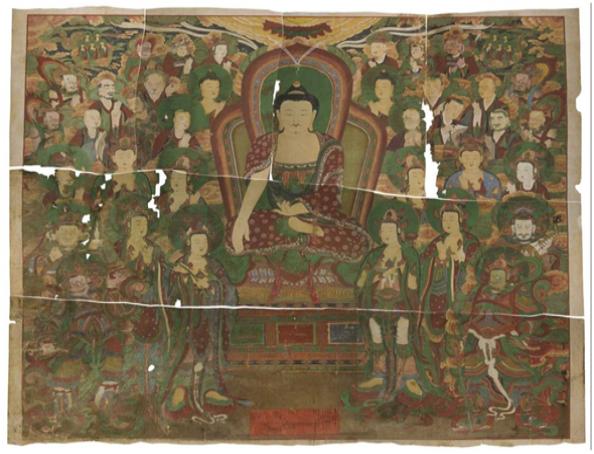 This photo provided by the Jogye Order shows the “Preaching Sakyamuni Buddha,” which will be repatriated from the United States in July.

SEOUL, June 25 (Korea Bizwire) — Four Buddhist paintings from the Joseon Dynasty (1392-1910), which were illegally shipped out of the country soon after the 1950-53 Korean War, will be brought back home from the United States next month, a local Buddhist sect said Thursday.

The Jogye Order of Korean Buddhism said it and the Los Angeles County Museum of Art (LACMA) have agreed on the restoration of the four Buddhist paintings, including the “Preaching Sakyamuni Buddha,” particularly in celebration of the 70th anniversary of the Korean War.

The paintings were taken out of Sinheung Temple, located at Mount Seorak, in Sokcho, 213 kilometers east of Seoul, in 1954.

The painting measuring 335.2 centimeters in width and 406.4 cm in length reportedly was taken to the U.S. in six pieces before being bought by the Los Angeles County Museum of Art in 1998 and fully restored by the museum and Korean specialists in 2010-11.

The LA museum also agreed with the Jogye Order to return three paintings of “Ten Underworld Kings” to Sinheung Temple, the sect said.

It is believed that the three paintings, all painted in 1798, were taken by some American soldiers out of the Mount Seorak temple between June and October of 1954.

“If it were not for LACMA’s affection for Korean cultural properties and its relevant preservation efforts, the Preaching Sakyamuni Buddha would not have been fully preserved until now,” the Jogye Order said, expressing gratitude to the U.S. museum.

The Jogye Order said it plans to hold a formal ceremony celebrating the restoration of the four paintings in August.